Dangote: I once withdrew $10m from the bank to convince myself I was rich 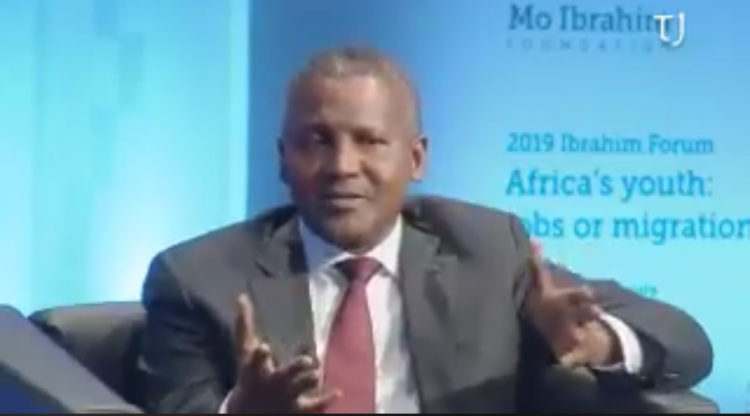 Aliko Dangote: wants to open an office in New York

Africa’s richest man, Aliko Dangote has said he once withdrew $10 million from a Nigerian bank for a reality check: whether he is truly a rich man.

He spoke in an interview in Abidjan on Saturday with fellow billionaire Mo Ibrahim, founder of Mo Ibrahim Foundation in a programme with the theme, African Youths: Jobs or Migration.

The video is now trending.

I Withdrew $10m Just To Look At It and convince myself that I was rich- Dangote pic.twitter.com/WdvMg9D7cC

The Nigerian billionaire, who will be 62 on 10 April, made money first of all trading in sugar, but he made far much more later when he went full blast into manufacturing, producing cement, sugar, pasta and juice.

“After a year or so, I realised that I had more than 12, 13 billion. I say Ok fine, all these numbers, are just written numbers, one day I went to a bank. At that time, there were no restrictions, and I wrote a check and cashed $10 million. And I took it home for myself. I put it in the booth of my vehicle and I went home. And I opened it and I looked at the $10 million and I believed that now I have money.”

Having convinced himself that he is truly rich, Aliko said he returned the money to the bank the following day, intact.

Mo asked him how much money he has in his wallet on the day of the interview, Dangote said he had none and empty his coat pockets to show that there was no money kept there.