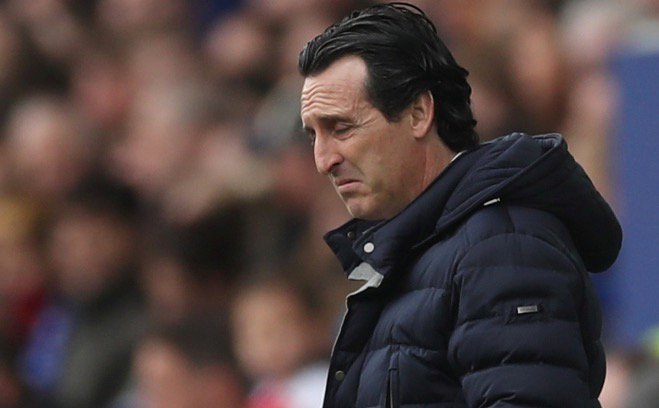 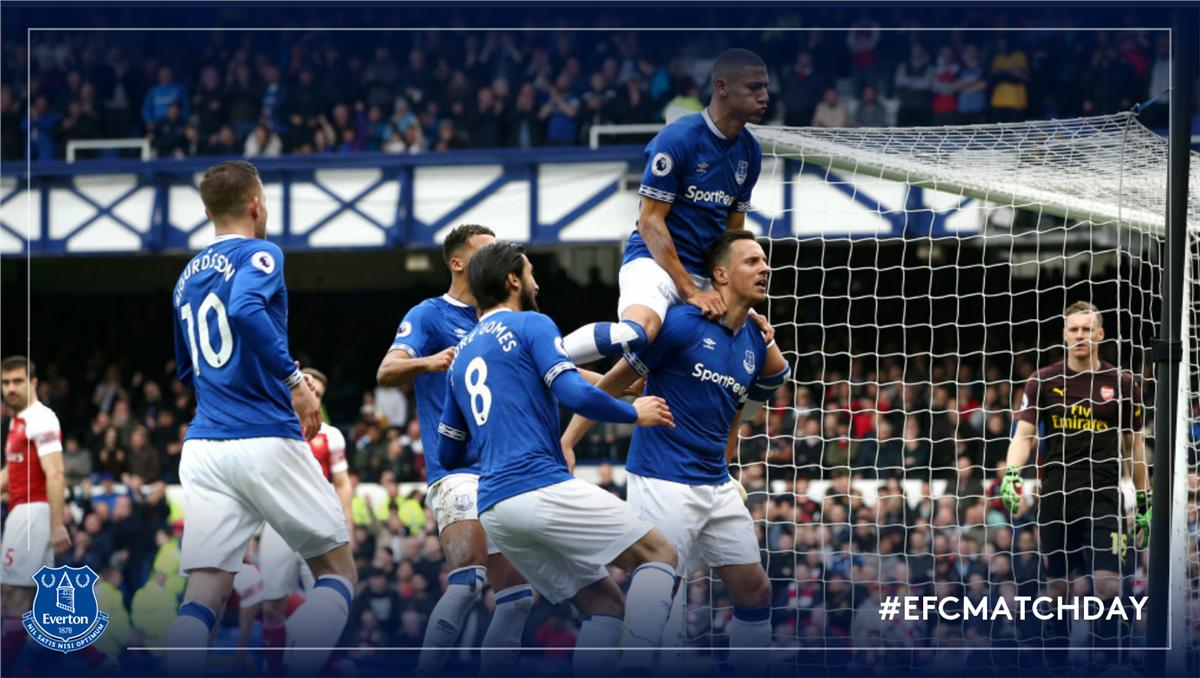 Everton shut out Arsenal, too, for a third clean sheet on the bounce. It was also the third time in a row Everton have prevented a side currently in the top six from scoring at Goodison.

Defender Jagielka was only playing as a very late replacement for Michael Keane, the England centre-back ruled out by illness shortly before kick-off.

The 36-year-old’s strike won’t make the showreel for any end-of-season DVDs but the simplicity of its execution should not detract from the calibre of football which preceded it.

Bernard was the orchestrator of a move launched in the home team’s half, the Brazilian finding Gylfi Sigurdsson and then advancing into Arsenal territory.

Sigurdsson fed Lucas Digne who, in turn, located Bernard for a cross that was cleared by Shkodran Mustafi.

Digne hurled in the throw, Jagielka darting to the near post and flicking into a crowded six-yard box. Dominic Calvert-Lewin careered in, intent on making contact and succeeding, the ball redirected into the feet of Jagielka who turned it over the line for his first Premier League goal since April 2017.

Arsenal had actually started in aggressive mode, Matteo Guendouzi booked for leaving something on Digne in a firm tackle – and Alexandre Lacazette forced to drag a shot across goal by the presence of Kurt Zouma, quickly eating up ground to cover as the visitors broke down Everton’s right.

Everton’s goal altered the feel of the contest entirely. Striker Calvert-Lewin was winning everything sent his way in the air and generally bullying a nervous-looking Arsenal back three.

Bernard, meanwhile, delved into his box of tricks, one flick opening up Arsenal on the right, another silky piece of footwork flooring Gunners’ wing-back Ainsley Maitland-Niles.

Andre Gomes pinged a pass 40 yards to the right for Richarlison which drew away the breath – the Portuguese having previously rifled off target with his left foot from 20 yards.

Calvert-Lewin was prevented from getting on the end of Richarlison’s cross – after the forwards’ original headed flick released the South American – by a smart piece of defending from Sokratis Papastathopolous.

For all Everton’s crisp passing and clever movement, it was the tenacity and application of Marco Silva’s players which really had the Goodison crowd off its collective seat.

Arsenal goalkeeper Bernd Leno firing a clearance out of play under significant pressure from Calvert-Lewin generated a ginormous roar.

Bernard retreating into his own box to block Maitland-Niles’ low effort had an equally galvanising effect. And in the second half Richarlison was 40 yards from his own goal when he slid in to disrupt Mesut Ozil’s flow.

But Everton, at this stage, were quicker of mind and foot. Nacho Monreal was rooted after conceding a free-kick for impeding Richarlison, the Everton player spying his opponent catching 40 winks and speeding off to receive Sigurdsson’s free-kick.

Sokratis bailed out his side with a sliding intervention.

Arsenal boss Unai Emery sent on Pierre-Emerick Aubameyang at the break, Aaron Ramsey, too. And the Welshman miscued a volley wide following Jordan Pickford’s punch clear minutes after his arrival.

The double-change – Kolasinac and Mohamed Elneny the men withdrawn – brought about a change of shape for the Gunners, Emery rejigging to a back four and sticking Ramsey in the middle of the park next to Guendouzi.

Ramsey was the one with licence to advance and he drilled past the near post after Arsenal recycled a right-wing corner on the opposite side of the pitch.

Sigurdsson took aim 10 minutes after the break, his 25-yarder dipping too late to test Leno – the Icelander off target again on 64 minutes when he skewed over after Seamus Coleman’s cross was only partially cleared.

There were chances at either end just before the hour. Bernard wriggled free of Maitland-Niles but fast ran out of space and was unable to chip the advancing Leno. Moments earlier, Mustafi landed a raking pass on the head of Lacazette but the forward’s connection was tame, enabling Pickford to make an easy claim.

Idrissa Gana Gueye had a shot close down by Ozil, one of the Premier League’s most unlikely episodes this term, surely.

And Richarlison, who linked beautifully with Coleman on Everton’s right, whipped a strike beyond Leno’s right post.

Arsenal countered for Mkhitaryan to send an effort scooting past the upright – but, before long, Sigurdsson and Leno were renewing their personal duel, the ‘keeper scooping up a low strike after Richardson’s run and cut back.

Next from Sigurdsson was another crack repelled by Sokratis, Richarlison skewing wide on the follow up. Theo Walcott, on for Richarlison, fed Bernard to bring out another stop from Leno. And Walcott had a close-range thump deflected off target as the clock wound down on a closing period when Bernard and Sigurdsson made way to huge ovations – Ademola Lookman and Tom Davies coming on as Marco Silva refused to cough up Everton’s ascendancy.

Davies had a drive blocked late in the piece, the hosts actually looking the more likely to score during five minutes of stoppage time.

Three deserved points lift Everton one place to ninth and within one point of seventh-placed Leicester City.