Watford into FA Final after emerging victory in 5-goal thriller 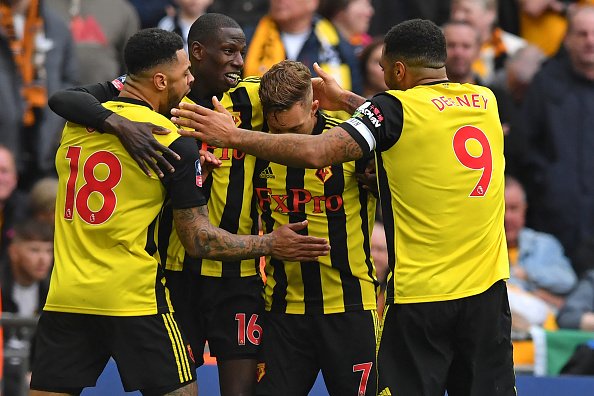 Gerard Deulofeu delivered a sensational display after coming on as substitute to inspire Watford’s dramatic comeback from two goals down to beat Wolverhampton Wanderers after extra time in the FA Cup semi-final at Wembley.

With 11 minutes left, Wolves looked on course for their first FA Cup final since 1960 as they led through Matt Doherty’s first-header and Raul Jimenez’s superb chest down and volleyed finish.

Deulofeu, the maverick talent who had never quite fulfilled his potential at Barcelona, Everton and AC Milan, was sent on to rescue Watford after that second goal and fulfilled his mission in spectacular style.

BBC reports that Deulofeu produced an audacious angled flick to give Watford hope and they drew level in injury time as captain Troy Deeney drilled home from the penalty spot after he had been fouled by Leander Dendoncker.

Deulofeu, however, was the catalyst and he showed composure and quality to provide the decisive contribution, steering a finish beyond John Ruddy in the 104th minute to send Watford to their first FA Cup final since 1984; they will meet Manchester City on 18 May.

Watford, to their eternal credit, never lost hope for one minute of this thrilling FA Cup semi-final even when Wolves looked to have victory in their grasp with a two-goal lead.

They had created chances but needed a spark to give meaning to all their good work – and it was the 25-year-old Spain international Deulofeu who provided it.

Deulofeu was regarded as a teenage superstar in the making at Barcelona but could not deliver in a second spell at the Nou Camp after a fine season on loan at Everton.

He produced occasional flashes of brilliance when he returned to Goodison Park but fell short and made his way to Vicarage Road to have another crack at the Premier League.

Under the careful guidance of manager Javi Gracia, he has hinted at greater consistency – but this was his finest hour in England.

Inevitably, Watford’s captain and leader Deeney also made his mark, winning a penalty then showing great nerve to lash his spot-kick past Ruddy.

Watford’s fans were a mixture of sheer elation and disbelief – and can now start plotting their return for the FA Cup final.

This was a performance of heart, quality and flashes of brilliance. They were deserved winners.