Why I turned 14-year old girl into sex slave - Suspect 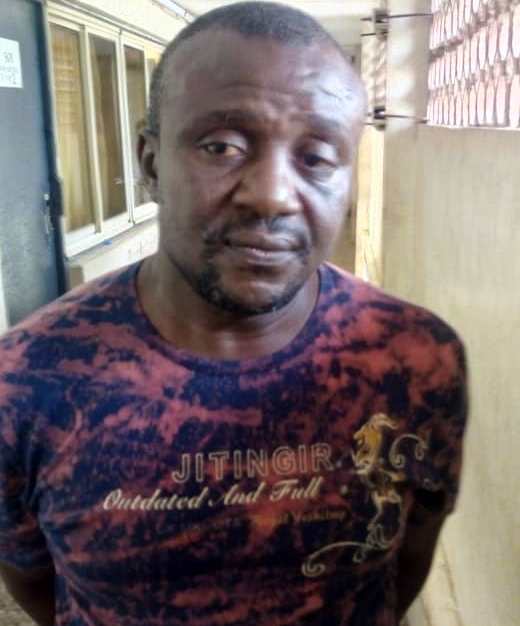 A 45-year old Nigerian film seller, Alfred Marainerume has explained why he turned a 14-year old girl into a sex slave by sleeping with her for 10 months.

Marainerume, who lives in Ejigbo was arrested by the Police for defiling the 14-year old girl (name withheld).

In his statement to the police, the suspect revealed that that he turned the girl into his sex partner after he divorce his wife in May 2018.

A statement issued by the Police Public Relations Officer, PPRO, Bala Elkana, said the matter was reported to the Gender Unit by the mother of the girl.

According to Elkana, the complainant stated that they lived in the same street with the suspect and that the suspect usually called the girl into his shop while on her way back from school, along Iyana Ejigbo road, Lagos, were he sells Nigerian Films and had unlawful sexual intercourse with her in the shop.

“The Crime started from May 2018 up to 27 March 2019. The suspect, in his statement to Police, revealed that he turned the survivor into his sex partner after he divorce his wife in May 2018. The matter was discovered on 27th March, 2019 at about 1400hrs, by the survivor’s grandmother who perceived some odour from the body of the survivor when she returned home and subjected her to questioning,” he said.

Elkana said the girl opened up to her grandmother and narrated the whole story, saying that the suspect threatened that she would die if she ever disclosed it to her parents.

The PPRO added that the girl also said that the suspect usually give her some drugs to take and equally mix salt and water for her to take after sex, to prevent her from getting pregnant.

Elkana said investigation was ongoing, and that the suspect would be charged to court for defilement.