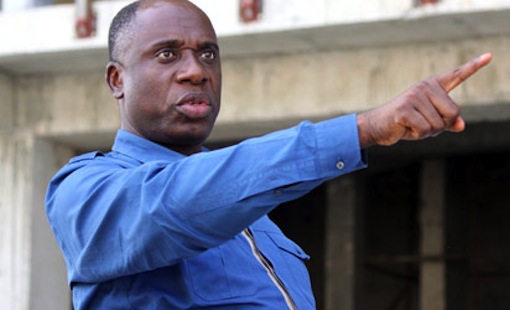 The Minister of Transportation, Mr Rotimi Amaechi, has blamed the China Civil Engineering Construction Corporation (CCECC) for the slow pace of work at the ongoing construction of Lagos-Ibadan Standard Gauge rail line.

Amaechi expressed disappointment on the progress of work done so far while inspecting the project on Monday.

The minister chided the contractor for slowing down work and track-laying from Distance Kilometre (DK) 121 to 157 of the Lagos-Ibadan rail line project.

According to him, the Federal Government plans to commence transportation of cargoes from the sea ports through the standard rail gauge by December.

“Since you came to this segment of the project, you have not done anything here.

“To those of you who are here with me on this inspection, did you see any work going on? There is no work at all.

“From Kilometre 121 to 157, there is no work at all; and you have no reason whatsoever not to have worked, because we are not owing you.

“You are doing no job, absolutely no job,” he said.

Amaechi also said that the Federal Executive Council would discuss the issue of the project during its next meeting.

The minister said he was dissatisfied with the contractor, saying the company had failed to implement the affected section of the project as earlier discussed with them at a previous meeting.

According to him, the Federal Government has paid its own counterpart fund for the project.

He said that the China construction company had no acceptable reason to tender for its inaction, since there was no funding problem on execution of the contract.

The minister, however, said that the contractor had pleaded for more time to meet the May deadline for the delivery date of the project.