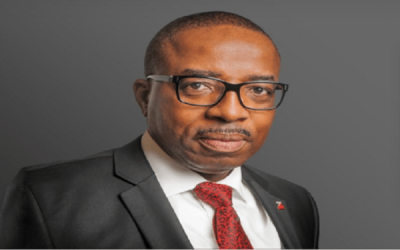 Zenith Bank Plc. has announced the appointment of Ebenezer Onyeagwu as the Group Managing Director/CEO of the bank with effect from June 1, 2019.

The bank, in a notice sent to the Nigerian Stock Exchange (NSE) on Monday, said the appointment is subject to the approval of the Central Bank of Nigeria (CBN).

Onyeagwu replaces Peter Amangbo, whose tenure expires on May 31, 2019 following a very successful career spanning over 27 years, with the last five years as GMD/CEO.

His replacement, Onyeagwu, is a vastly experienced banker and financial expert, trained in reputable institutions of learning in Nigeria, the United Kingdom and United States of America.

He is an alumnus of the prestigious University of Oxford, England, from where he obtained a Postgraduate Diploma in Financial Strategy, and certificate in Macroeconomics.

Onyeagwu, who is a graduate of accounting from Auchi Polytechnic, began his career at the defunct Financial Merchant Bank in 1991 and later held several management positions in the erstwhile Citizens International Bank Limited until 2002.

He joined Zenith Bank Plc in 2002 as a Senior Manager, in the Internal Control and Audit Group of the bank.

He was named Executive Director of the bank in 2013, and put in charge of Lagos and South-South Zones as well as strategic groups/business units of the bank including Financial Control & Strategic Planning, Treasury and Correspondent Groups, Human Resources Group, Oil and Gas Group, and Credit Risk Management Group, etc.

He was named Deputy Managing Director of the bank in 2016 and is on the board of Zenith Bank Ghana, Zenith Pensions Custodian Limited, Zenith Nominees Limited and African Finance Corporation.

As Deputy Managing Director, he had oversight over the bank’s Financial Control and Strategic Planning, Risk Management, Retail Banking, Institutional and Corporate banking business portfolios, IT Group, Credit Administration, Treasury and Foreign Exchange Trading, as well as general administration of the bank, among others.