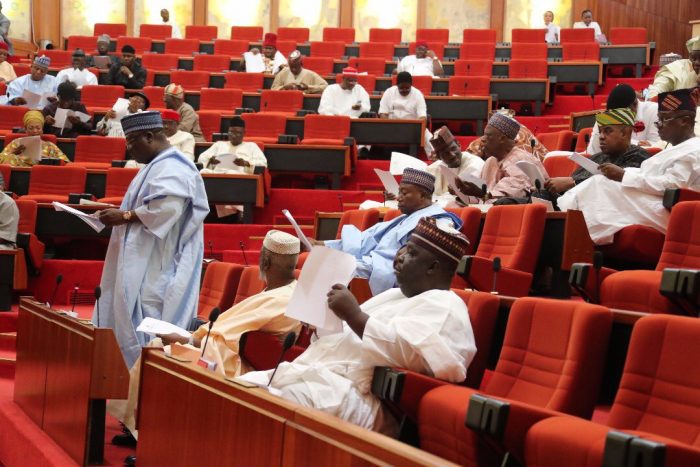 The Senate during plenary

The Senate has proposed that a N10 billion intervention be made part of the 2019 Budget to assist persons displaced by banditry in Zamfara.

This followed a motion by Sen. Kabiru Marafa on Wednesday at the Upper Chamber.

The senate further called for establishment of a 10-year Presidential Initiative to cater to the needs of displaced persons affected by banditry in the state.

Presenting the motion, Marafa said recent public protest staged in Abuja and Nigerians in the Diasporas was a reaction to the deteriorating state of insecurity in Zamfara.

He said there was need to commend those who staged the protest for their show of support and to sustain the solidarity.

The lawmaker lamented that the activities of armed bandits, cattle rustlers and kidnappers for ransom in villages and communities had remained unabated in the state.

“The activities of these armed bandits and cattle rustlers have since 2011 to date, resulted in the death of many people.

“This is in addition to creating humanitarian crises which included, but not limited to, growing number of widows, rape victims and orphans

“A conservative estimate of 11,000 male adult have been killed by armed bandits, leaving behind an average of 22,000 widows, at 2 wives per person and an estimated 44,000 orphans, at an average of 4 children per deceased.

“Owing to cultural and religious consideration, the burden of these widows, orphans, rape victims and displaced persons are borne largely by close relatives.

“Their needs are borne by extended families and sometimes immediate neighbours, who are now overstretched to a point they can no longer cope,” he said.

The lawmaker also said the killings had brought untold hardship on several families who had to accommodate displaced persons and families, over stretching accommodation, scarce food, clothing and other necessities.

According to him, the negative consequences arising from the crisis and the need for more humanitarian interventions for the growing number of widows and orphans had become necessary.

He therefore urged the senate to commend all Nigerians who, irrespective of cultural, religious and tribal differences, came out in their number to show solidarity to the plight of their brothers and sisters in Zamfara.

He further urged the senate to make provision for the sum of N10 billion in the 2019 Appropriation as Intervention Fund to cater for the IDPs and other persons affected by the activities of armed bandits in the state.

He equally urged the Federal Government to set up an Adhoc Committee to be known as Presidential Initiatives on Zamfara State (PIZAMS), with a 10 year life span to manage the said funds and subsequent allocation and donations.

Contributing, some lawmakers recommended the creation of State police and constitutional amendment to devolve more powers to the states as part of solutions to the problem.

They said the three-month ban on the use of commercial motorcycle imposed by the state government would go a long way in addressing banditry in the state.

The lawmakers equally noted that the only way to tackle the numerous security challenges in the country was to decentralise the Nigerian Police Force.

In his remarks, the President of the Senate, Dr Bukola Saraki, said until Nigeria began to look at the possibility of establishing State Police, the country would continue to have security challenges.

He expressed concern at the turn of events in Zamfara, saying the state used to be very peaceful.

Saraki charged relevant authorities not to rest on their oars in nipping the crisis in the bud.

The president of the senate put the recommendations to voice vote and they were unanimously adopted.