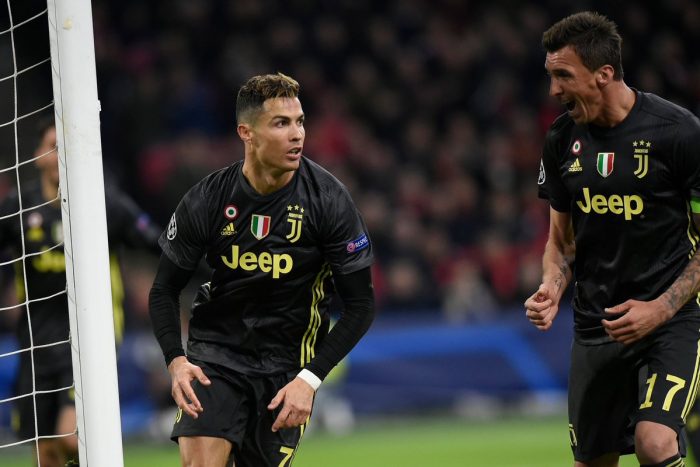 Cristiano Ronaldo secured an away goal for Juventus as they drew the first leg of their Champions League quarter-final against Ajax.

BBC reports that the goal had come against the run of play, but the hosts equalised within a minute of the second half starting, through David Neres’ fine curling effort from 15 yards.

Both teams had late chances with Ajax’s Jurgen Ekkelenkamp having a shot saved before Juventus substitute Douglas Costa hit the post.

But neither side could grab a winner and they meet in the second leg in Turin on Tuesday, 16 April.

The winners of the tie face either Tottenham or Manchester City in the semi-finals, with Mauricio Pochettino’s side holding a 1-0 advantage after Tuesday’s first leg in London.

Ronaldo was playing for Juventus for the first time since he scored a hat-trick to give them 3-2 aggregate victory against Atletico Madrid in the last 16.

He picked up a thigh injury on international duty for Portugal and there were doubts whether he would be fit enough for the tie.

But his fifth Champions League goal of the season gives his side a good chance of reaching the final four, and a goalless draw at Juventus Stadium next week will be enough for them to advance.

The Italian leaders, who are only one point away from winning the Serie A title, had not had a shot on target before their 45th-minute goal.

It came from a throw in near the halfway line and they quickly countered with Ronaldo releasing Cancelo, but no Ajax man tracked the Portugal forward’s run into the penalty area and his diving header was too powerful for Ajax goalkeeper Andre Onana to keep out.

Ronaldo won the Champions League title in each of the past three seasons at Real Madrid before his move last July to Juventus, who remain on course to win the tournament for the first time since 1996.