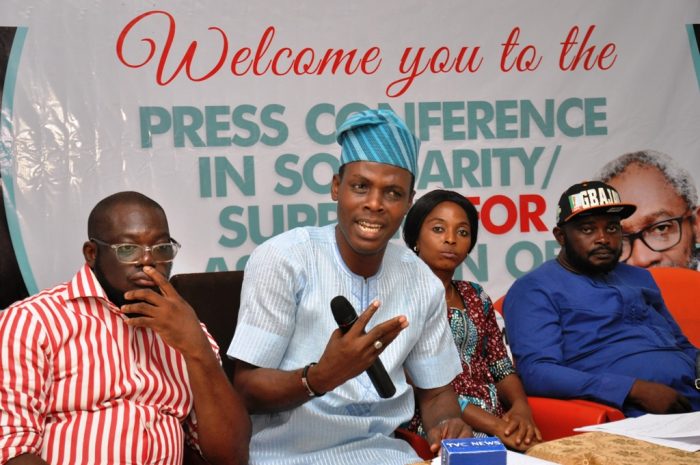 Youths in South West geo-political zone on Thursday urged members of the All Progressives Congress (APC) in the National Assembly who are interested in contesting against the choice of the party for leadership of the ninth assembly to drop their ambitions and uphold the supremacy of the party.

The APC had endorsed Senator Ahmed Lawan and Femi Gbajabiamila as Senate President and Speaker of the House of Representatives respectively in the ninth National Assembly starting in June.

The youths, under the auspices of Congress of South West Youths (COSWY), specifically urged Senator Ali Ndume and others to drop their ambitions and rather support the candidates of the party for the leadership of the assembly

The congress is an umbrella body of youth organisations in Yorubaland such as Asiwaju Grassroots Foundation, All Progressives Youth Forum, Project Loud, Yoruba Council of Youth (worldwide), among others.

Convener of COSWY, Ahmed Shomoye, said at a press conference held in Ibadan on Thursday that the ‘shining leadership qualities’ of Lawan and Gbajabiamila and the need to further deepen democratic rule necessitated the appeal.

Shomoye, who was supported by the leadership of various youth groups and youth leaders of the All Progressives Congress (APC), said: “We hereby state affirmatively that given their shining leadership qualities, their undiluted party discipline, their high sense of patriotism, their immense wealth of experience, their visionary and principled posture, over the years, in repositioning the National Assembly as a legislative institution, the emergence of Femi Gbajabiamila and Senator Ahmed Lawan as Speaker of the House of Representatives and Senate President respectively to pilot the affairs of the ninth assembly would restore the glory of the nation’s apex legislative institution and would further deepen democratic rule and the delivery of good governance to the people of Nigeria.

“We, hereby, urge all other APC candidates to step down for these two candidates in the collective interest of the All Progressives Congress (APC) as a party, for unparalleled legislative advancement, democratic stability and for the actualisation of the dreams of President Muhammadu Buhari to further take our dear nation to the next level in his second term.”

Shomoye noted that as the tenure of the eight assembly “is almost coming to an end and the newly elected federal lawmakers are getting prepared for their inauguration as the ninth assembly in June, this year, this is the most auspicious time for all critical stakeholders of democratic rule in Nigeria to join forces together and ensure that the shenanigans, which transpired in the eight assembly do not, in any way, repeat themselves again.”

Lawan and Gbajabiamila, according to the group, “really deserve the respective positions, having served the party meritoriously with esteemed courage, unwavering loyalty and legislative diligence since the sixth and seventh assembly and have garnered immeasurable wealth of experience in the parliament, profound leadership and crisis management skills as well as deep exposure in inter-parliamentary affairs around the globe.

Shomoye noted that Gbajabiamila had in the past two decades sponsored and co-sponsored innumerable life-transforming bills and motions with a view to alleviating poverty and promoting good governance across the country, adding that he had fought fearlessly and tirelessly to ensure democratic sustainability and good governance in Nigeria.

Also speaking, Youth Leader of APC in Lagos State, Mr Omotayo Sanyaolu said it was on record that Gbajabiamila ensured that most of the Executive Bills that were sponsored by members of the Federal Executive Council were given utmost attention and prompt passage in the overriding interest of the downtrodden people of Nigeria.