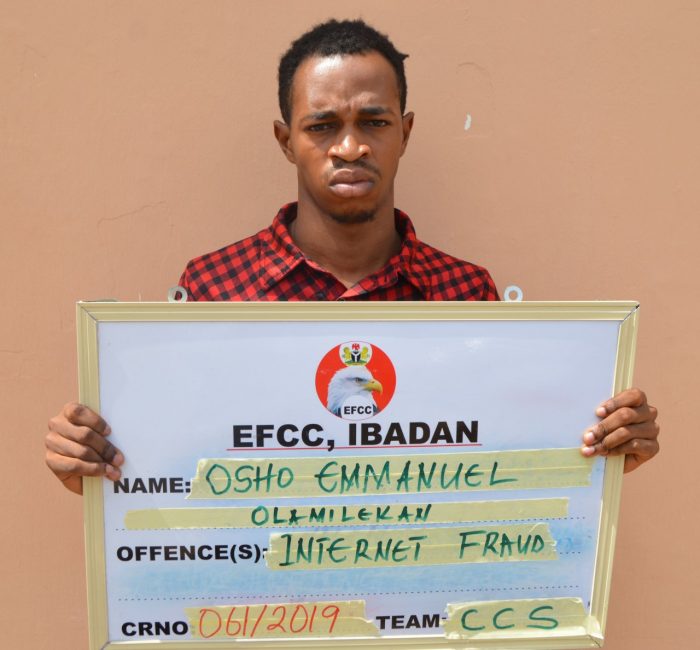 Osho, a 20-year old graduate of Computer Engineering Technology from the state-owned Rufus Giwa Polytechnic, Owo, Ondo State, was found guilty of obtaining by false pretence in a five-count amended charge file against him by the Economic and Financial Crimes Commission, EFCC, Ibadan zonal office.

He had presented himself to be an American Marine Soldier to his victims, dispossessing them of different sums of money to the tune of thousands of United States Dollars.

Among his victims were Sabrina Robinson, Rachel Evans, Alisha Brice and Nokitha Miller, all American citizens, from whom he collected sums at different times after deceiving them that he was an American Marine Soldier, who lost valuables to a major attack in Nigeria.

The convict was originally arraigned on an eleven-count charge on Monday, April 8, but his plea was not taken. He was brought back the following day to face a five-count amended charge, each of which he pleaded guilty to.

One of the amended charges reads: “That you, Olamilekan Emmanuel Osho, a.k.a Dustin Coco Wesley, on or about the 28th of November, 2018, at Owo within the Akure Judicial Division of this honourable court with intent to defraud, obtained N139,429.80 being the equivalent of $800 from Sabrina Robinson, an American Citizen, by falsely pretending to be an American Marine Soldier on mission to Nigeria, who lost his electronic gadgets during an attack on their camp, which representations you knew to be false and thereby committed an offence”.

Having pleaded guilty, the prosecution counsel, Dr. Ben Ubi prayed the court to sentence him accordingly.

The court agreed and convicted Osho of the offences. He was sentenced him to six months imprisonment. The prison term takes effect from the day of judgment.

He was also ordered to forfeit the sum of N1, 000,000 to the EFCC as restitution to the victims of his crimes.