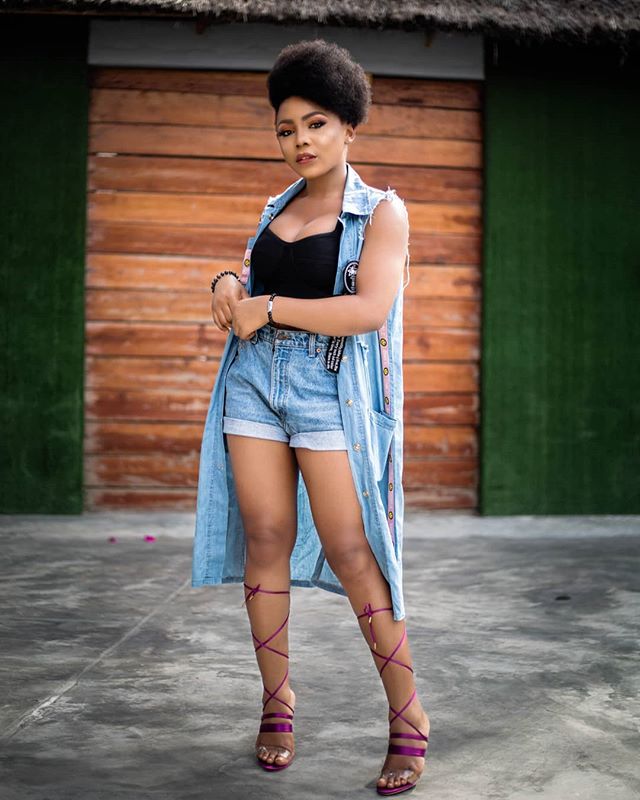 Entrepreneur, actress and former Big Brother Naija housemate Ifu Ennada has apologized to her fans for a statement she issued on her page.

The natural hair enthusiast said people who do not have friends that can give them N500, 000 should change their circle.

Fans clapped back at Ifu, telling her that before the BBN fame she couldn’t afford such money. Ifu has now come out to refute the claims, give proper explanation and an apology that she says she owes no one.

The post comes after Soso Soberekon, who had been the long time General Manager of Five star music group, owned by Emeka Okonkwo, aka E-Money and his elder brother, KCee, urged his followers to ”Surround urself with people who will lift u up, life is already filled with those who want u down.”

Soberekon fans therefore started begging him to lift them up and Ifu joined, leaving her account number on his page of which her credited her N500, 000.

Pls Read…Some people were angered by a section of my last post – where I talked about 500k not really being a huge sum and how I feel having someone in your circle who can give that to you isn’t abnormal. Some even asked if I had people who could give me that kind of money before BBNaija…
—
First of all I’m sorry if I cut across the wrong way. It wasn’t my intention to be that way.
—
And yes to your questions; long before BBNaija I had people in my life who gave me 500k… My short film – Tears of a Broken Virgin was brought to life after a friend of mine gave me 500k to produce it. His name is Solomon. This was 2yrs before Big Brother. You can watch my short film by clicking the link in my bio.
—
My beautIFU people, being broke doesn’t mean you should also surround yourself with people in the same financial state as you.
—
You can be broke but have rich dreams and in order to bring your dreams to reality it’s always good to include people who have the capacity to move your life forward in your circle.
—
For people to lavishly support your dreams they need to see why they should, there has to be something you’re bringing to the table.
—
I was a financially poor girl with big dreams but I was always working on myself, being resourceful and adding value to people even the rich… one day I’ll tell you how I made my first 1.8 million at age 22 – even though money was mismanaged…but right now I want to give God the glory for everything that I am and also let you know that I’ll never look down on anyone.
—
Lastly one thing that has worked for me is to dream so big that certain things that appear big to others seem small to me- this positions my mind in a way that makes it say – nothing is impossible with God and when you believe this, there’s really nothing you can’t achieve. —
I sincerely hope you don’t misunderstand me. I care about you guys and I want to inspire you the right way, this is why I’ve taken my time to explain myself even though I don’t owe anyone an explanation. ❤
Ifu

Caption this… In other news I had to take down my 500k gift post from @sososoberekon cos the begging was too much, some even went to the extent of emailing me to call me Small Girl Big God cos of 500k.😢 Nigerians we can do better.
—
First of all, if you notice that money was sent directly to my business account, not even my personal account that I posted in his comment section. This isn’t the first time Soso will be supporting me in such way, I posted the screenshot and thanked him publicly because it came so fast and I wasn’t even expecting anything since I jokingly commented. Few weeks ago I thanked Soso publicly here for always supporting me, what do you think that was for?
—
500k isn’t such a big sum…if you don’t have people who can comfortably gift you 500k without expecting you to open your legs then you need to work on yourself and change your circle.

Surround urself with people who will lift u up,life is already filled with those who want u down.