Chibok girls: Parents of abducted girls renew call for release of others 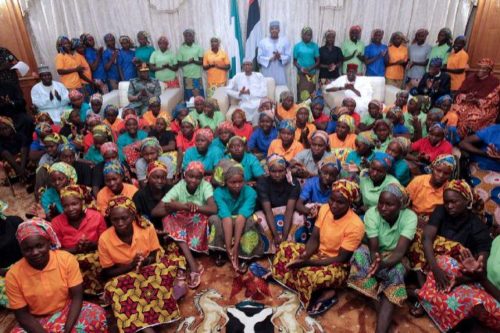 Parents of abducted Chibok School Girls in Borno have renewed calls to ‘Boko-Haram’ insurgents to release the remaining girls they abducted five years ago.

A cross section of the parents made the call in separate interviews with the News Agency of Nigeria (NAN) on Sunday in Maiduguri.

The parents spoke on the sideline of a rally organised by a non-governmental Organisation, ‘Al’amin Foundation for Peace and Development’ , as part of activities to mark the fifth year anniversary of the abduction of over 270 school girls.

Recall that the insurgents had on April 14, 2014, abducted the girls at Government Girls Secondary School (GGSS), Chibok in Borno.

In May 2016, one of the abducted girls, Amina Ali, was found after she escaped from captivity.

Another set of 21 girls were freed in October 2016, while one girl was also rescued in November same year by the military.

Similarly, 82 girls were freed following negotiations with government in May 2017, while one more was girl rescued in January 2018.

Recheal Daniel, a mother of one of the abducted girls, Rose Daniel, appealed to the Boko Haram factional leader, Abubakar Shekau, to release her daughter.

Daniel lamented that the incident had subjected her to pain and agony, adding that her husband was also killed by the insurgents.

She said that since then, she had been shouldering the up-bringing of six children left behind by her husband.

Ayuba Alamson, a guardian to some of the abducted girls, said six of his niece and sisters were abducted at the school on the fateful day.

Alamson said that three of the girls had been freed while the remaining were still with the insurgents.

He lamented that about 18 affected parents had died due to health complications associated with trauma they experienced as a result of the abduction of their daughters.

Alamson urged the Federal Government, United Nations (UN) and development organisations not to relent in their effort at ensuring the release of the girls from captivity.

“I also pray for the freedom Leah Sharibu, the only girl held back by Boko Haram insurgents after they released over 112 girls abducted at Government Girls Secondary School in Dapchi, Yobe.

Musa Maina, another resident of Chibok, appealed for the release of his wife, Zahra Musa, and daughter, Hadiza Musa, from captivity.

Maina recounted that he fled Chibok to Konduga after the April 14 school abduction incident, only to ended up in another abduction trap set by the insurgents.

“Two people came to my house with guns in an attempt to kill me. I and my second wife managed to escape but they took away my first wife and her daughter,” he said.

On her part, Mrs Hamsatu Allamin, the Director of Al’amin Foundation for Peace and Development, said thousands of women and children were being held hostage by the insurgents.

Allamin disclosed that the organization had embarked on comprehensive campaign to create awareness on abduction of women by the insurgents in the northeast.

She called for concrete measures to secure the release of the Chibok School girls and other persons being held by the insurgents throughout the country.