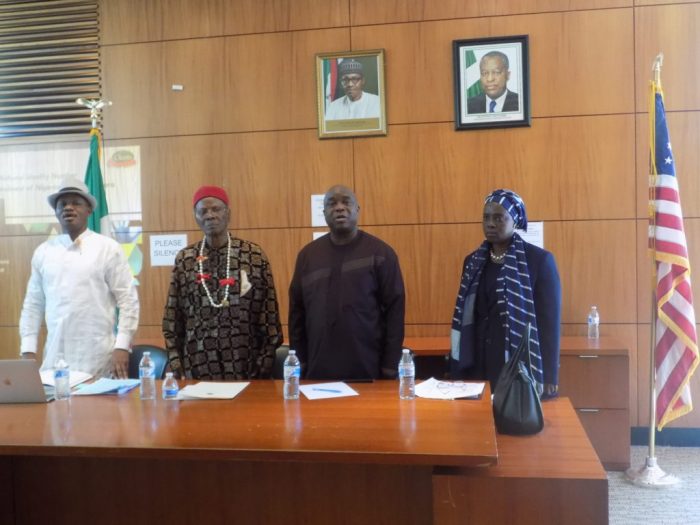 The Nigerian Missions in the United States and Nigerian diasporas on Saturday converged on the Embassy of Nigeria in Washington DC to reconcile factional groups in the Nigerians In Diaspora Organisation Americas (NIDOA).

The reconciliation followed earlier separate meetings with NIDOA Board of Trustees (BoT) and NIDOA USA Board of Directors (BoD) at the Consulate General of Nigeria in New York.

An expanded joint meeting was called for Saturday between the warring parties and the three Nigerian Missions in the United States.

The News Agency of Nigeria reports that a major cause of the disagreements between the two parties included whether the step taken by NIDOA USA to register the national body in the United States where it operated was in the right direction.

Whether the move by NIDOA USA to adapt the NIDOA bylaw to suit its operations in the United States was against the provision of the NIDOA bylaw was also an issue of contention.

Another issue in the conflict was whether the step by NIDOA USA BoD to appoint a Legal Adviser for NIDOA USA as applicable in NIDOA Canada and NIDOA Brazil was against the provision of the NIDOA.

The Nigerian Ambassador to the United States, Justice Sylvanus Nsofor (rtd) chaired the meeting, and was supported by the Deputy Head of Mission Amb. Hassan Hassan, the Nigerian Consul General in New York, Benayaogha Okoyen and the Consul General of Nigeria in Atlanta, Mrs Aishatu Musa.

The Consul General in New York briefed the meeting on the conflict between the NIDOA BoT and NIDOA USA BoD, based on the peace talks he initiated with both parties towards the resolution of the conflict.

After extensive discussions among the parties and the participants, the parties in conflict agreed to adhere to the outcome of the peace process.

The parties also agreed on the need for unity, peace and stability among all NIDOA entities in the United States in order to avert the recurrent crisis in NIDOA’ BoT and NIDOA USA.