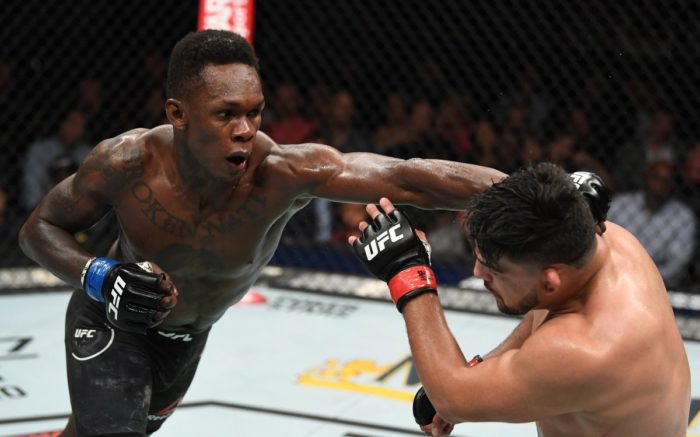 Few gave him a chance, but Nigerian-born Israel Adesanya has beaten Kelvin Gastelum to claim the Interim UFC Middleweight Championship by unanimous decision.

Adesanya, who is a citizen of New Zealand outlasted Gastelum in a monumental battle, winning a unanimous decision by scores of 48-46 on all three judges’ cards, completing a meteoric 14-month rise to the top of the division.

The Nigerian-New Zealander grew up idolizing Anderson Silva, and the UFC middleweight did a lot of Silva-like things in his bout with Kelvin Gastelum for the interim title Saturday in the co-main event of UFC 236 at State Farm Arena in Atlanta.

But Adesanya created his own legacy with a brilliant performance in which he had to dig down deeper than he had at any point in his career. The win was his sixth in just 14 months in the UFC, but by far the biggest and most significant.

It was a titanic struggle in which the men laid their souls bare and went after the victory with every ounce of strength and desire that was inside of them. Both were on the ground and both were bleeding and sweating profusely by the time it ended.

The fight was even on all three scorecards heading to the fifth, and Adesanya won it with an incredible striking display. He nearly finished the bout with a triangle choke in one of the many “I can’t believe that!” moments that occurred throughout the fight.

Adesanya won the round 10-8 on all three judges’ cards that cinched the belt and probably put it into the lead for the mythical Fight of the Year honour.

Gastelum, who gave up seven inches in height and more than eight inches in reach, did everything he said he’d do. He pressured Adesanya and gave as good as he got throughout the bout.

At times, it was like rock ’em, sock ’em robots, as Gastelum’s reach disadvantage forced him to wade into the pocket. He had plenty of success, but Adesanya’s short rights eventually took their toll. He dumped Gastelum multiple times in the fifth and nearly stopped him in the final 30 seconds.

“I was willing to give it all and leave it all in there,” Adesanya said. “He’s a Mexican warrior, but hey, I’ve got that Mexicano in me, too.”

Adesanya improved to 17-0 as professional and 6-0 in the UFC, while Gastelum (15-4, 1 NC) loses for just the second time since moving up to the middleweight division.

Up next, Adesanya presumably faces undisputed champion Robert Whittaker. If his post-fight swagger is any indication, he’s ready to show who is truly the top dog at 185 pounds.

Israel Mobolaji Adesanya was born in Lagos on 22 July 1989. He is a professional mixed martial artist, kickboxer, and boxer.

He trained taekwondo for a brief time in his youth but was removed by his mother after breaking his arm.

At the age of 13, he moved to Rotorua, New Zealand and attended Rotorua Intermediate. He started training in kickboxing at age 18 after being inspired by the Muay Thai film Ong-Bak and went on to amass an amateur kickboxing record of 32-0 prior to moving and fighting in China.

At the age of 21, Adesanya relocated to Auckland, New Zealand, and began training at City Kickboxing with other established fighters such as Kai Kara-France and Dan Hooker.

Adesanya made his professional debut in 2012. Fighting in Hong Kong, Australia and China over the next five-and-a-half years, he amassed a record of 11-0 with all wins coming via KO/TKO prior to being signed by the UFC in December 2017.