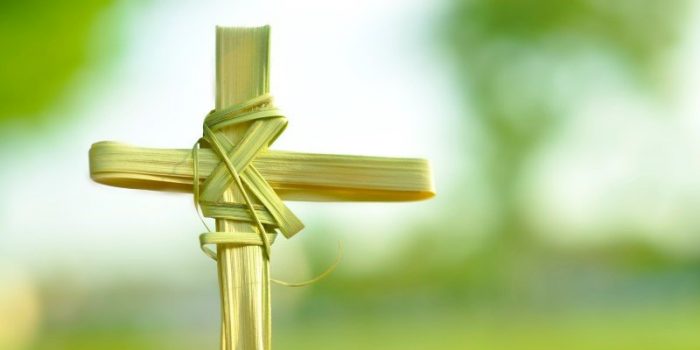 Cross made out of palm fronds.

The Christian Association of Nigeria (CAN) Oyo state Branch, on Sunday urged Christians to take advantage of the significance of Palm Sunday to imbibe the culture of living a life of sacrifice.

Chairman of the branch, Pastor Benjamin Akanmu, made the call in an interview with the News Agency of Nigeria (NAN) in Ibadan.

Akanmu also urged Christians to emulate the humility, love, and selfless service of Jesus Christ, which made Him to die on the cross for the salvation of mankind.

He called on Christians to live a life of positive impact in the society and to draw people to Christ even as they do what those things that would be acceptable before God.

“When Jesus entered the city of Jerusalem on what we commemorate as Palm Sunday, His entry was in fulfillment of the prophecy of Zechariah; He is victorious, triumphant, riding on a donkey.

“We should pray for divine strength, learn to love unconditionally, just like Jesus, we should always allow God’s will to be done in our lives, we should love, be strong even when the going is rough and shouldn’t be Palm Sunday Christians by mouth,” he said.

He added that it was also to remember when Jesus Christ entered Jerusalem as Saviour, King of kings and Lord of lords.

“As He rode on a donkey into Jerusalem, a large crowd followed Him, laid palm branches, their cloaks on the road, shouting hosanna, hosanna to the son of David, blessed is He who comes in the name of the lord, hosanna in the highest,” he said.

Okoye said that it showed the humble, peaceful nature of Jesus riding on a donkey as a king rather than a warhorse; it showed that Jesus is a burden bearer as He rode on a donkey (a beast of burden).