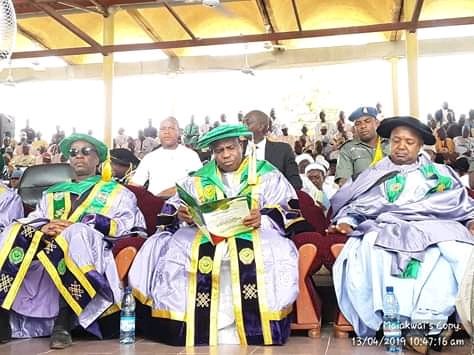 The university which held its 35th to 37th combined convocation on Saturday, also said that 121 students bagged first class degrees.

The Vice-Chancellor, Prof. Abdullahi Zuru, also disclosed that 135 were Ph.D holders, 770 Masters degrees and 10,034 obtained first degrees, among others.

The Vice-Chancellor explained that 109 students would also receive various prizes based on their excellent performances.

Zuru explained that the university, within the period, established modern urology centre, new faculty of agriculture and modern communication support centre, among others.

President Muhammadu Buhari, who was represented by the Minister of State for Education, Prof. Anthony Anwuka, promised to sustain meaningful investments in education.

The President has also urged graduates across the country to queue into national building initiatives.

He urged managements of universities to evolve measures to improve the welfare of their staff and students.

President Buhari described the strike by staff as detrimental to academic and manpower development in the country.

He urged the unions to be considerate as his government was not unaware of their problems and would not leave any stones unturned in addressing them.

The president congratulated the graduates and enjoined them to be good ambassadors of the institution and the country.

He further thanked Nigerians for renewing his mandate and giving his party, the All Progressives Congress (APC), the majority in the National Assembly and assured that they he would continue with the good works started and improve on them.

Also, the Pro-chancellor of the university, Justice Pearl Enejere, congratulated the President on his re-election, which she said was as a result of his proven integrity and sincerity of purposes.

She said the university would continue to be active on the formulation and implementation of his government’s policies.

She, however, noted that the institution was left behind in terms of infrastructure and internally generated revenue as a result of which they could not maintain their infrastructure among others.

The Pro-Chancellor urged the management of the university to find ways of improving their internally generated revenue.

In his presentation, the Chancellor of the University and Oba of Lagos, Oba Rilwanu Akiolu thanked the Federal Government for providing additional projects in the university.

Also, two distinguished retirees, who had dedicated their entire working career to the service of UDUS and the nation were conferred with Emeritus status.

The beneficiaries were Dr Zayyanu Abdullahi, the Emir of Yauri in Kebbi state as Chancellor Emeritus and Prof. Tijjani Bande, the Permanent Representative to the United Nations as Professor Emeritus.