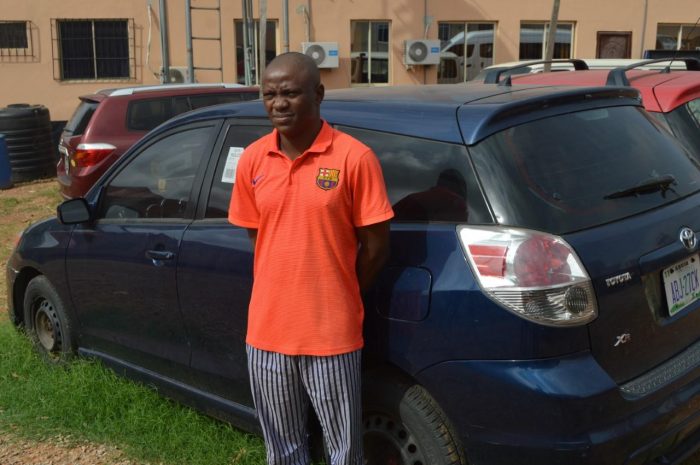 The Economic and Financial Crimes Commission, EFCC, has urged the general public to be vigilant in order not to fall victim to new tricks deployed by car thieves to dispossess unsuspecting Nigerians of their vehicles.

The alert was borne out of the shocking discoveries made during investigations into the allegations of crime leveled against Babatunde Oluwatope Oni alias Olu Daniel and Oni Daniel Oluwatope.

Babatunde, who hails from Odo Eri, Yagba West Local Government Area of Kogi State, was recently arrested by the Ibadan zonal office of the commission for alleged conspiracy, stealing and issuance of a dud cheque following a petition received from Mr. Kamoru Yekini on November 21, 2018.

The petitioner had alleged that on October 16, 2018, two men approached him at his shop at Iwo town, Osun State to indicate interest in purchasing a 2006 Toyota Matrix car he displayed for sale.

After negotiation, the two parties agreed on N1.580m and a post-dated First Bank cheque was issued supposedly to cover the cost. The cheque bore the name Rabiu Bamidele Lateef as the account owner.

But, in order to veil his criminal intention, Babatunde, according to the petition, acted as a driver to the other suspect, now at large, with whom he came for the negotiation. The other man falsely introduced himself as the account owner and a doctor at Bowen University, Iwo.

Having agreed on the price, Bamidele left the scene to ‘deposit’ the money and later came with a copy of the deposit slip as an evidence of payment of the agreed sum.

Though not comfortable with the payment arrangement, the car dealer still reluctantly released the vehicle and the custom duty papers, hoping that he would contact the ‘buyer’ through his phone number should any issue arise.

It was until the following day that he got a call from his bank that the cheque has been returned unpaid due to insufficient funds.

All efforts he made to get the suspects proved abortive since all the information given turned out to be false.

That led him to petition the EFCC for assistance. The commission swung into action on receipt of the complaint and recovered the car in Abuja where it was already sold to a lady for a sum of N1.8m.

The car was later traced to Babatunde, who was arrested in his hideout in the Federal Capital Territory.

While Babatunde was already in the EFCC’s custody, another complainant surfaced with a similar issue.

According to the complainant, on September 7, 2018 two men came to his filling station around Mokola, Ibadan, Oyo State to negotiate for a 2007 Toyota Avensis car he displayed.

He alleged that after the negotiation, they agreed to pay N2m. Again, Bamidele immediately issued a cheque of N2m to ‘pay’ for the car.

Just as he did in the other case, Babatunde, again acted as the driver to a ‘big man’ he came with. He also took the cheque to the seller’s bank to ‘deposit’ the sum, and came back with a deposit slip.

While they were already testing the car, the car dealer told the suspects to hold on for him to confirm the status of the deposit from his account officer.

But before he could do that, Bamidele and his partner zoomed off with the car since the car keys and papers had already been handed over to them. The cheque with which he made the ‘payment’ was later returned unpaid and all efforts made to contact the men proved abortive.

Investigation by the EFCC revealed that Babatunde’s modus operandi was to issue cheques to car dealers and leave with the car.
Such cheques were either stolen from unsuspecting Nigerians or are linked to unfunded accounts. For instance, the cheque bearing the name of Rabiu Bamidele Lateef issued in the first case was stolen as the owner, a pastor, had made statement to the commission to deny knowledge of issuance of his cheque for the said transaction.

Apart from stealing people’s cheques and issuing dud cheques to commit acts of fraud, investigations also showed that Bamidele often uses fictitious names in some of his criminal transactions.

When asked about the identities of his accomplices in the operations, Bamidele gave the name as Santar Ademola, who, he alleged, was late at the time of his arrest.

The suspect appears to be a serial car thief as investigations revealed that sometime in 2017, he was prosecuted by a sister agency for similar offence. He was, however, released from prison custody where he was remanded when the complainant stopped showing interest.

Members of the public are by this report advised to be wary when transacting business with people they do not know.

The Commission is making frantic efforts to get other culprits arrested. They will be charged to court as soon as investigations are concluded.