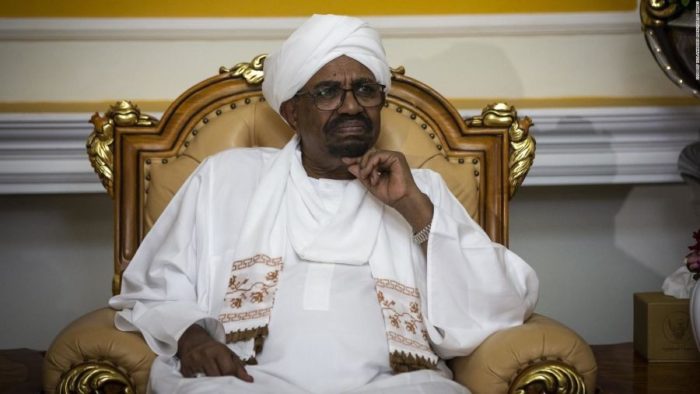 Following the dramatic end to Bashir’s rule of three decades last week, he was moved late Tuesday to Kober prison in the capital, a family source said without revealing his name for security reasons.

Witnesses near the prison in north Khartoum said there was a heavy deployment of soldiers and members of a paramilitary group outside.

The 75-year old’s whereabouts have been unknown since a military takeover on Thursday, when the country’s new rulers said he was being held “in a secure place”.

The army council said it has also decided to integrate the Popular Defence Force into the army. The PDF is a type of reserve unit frequently used to support units of the regular army.

Amnesty International called for Bashir to be “immediately handed over to the International Criminal Court” in The Hague where he faces charges of genocide, war crimes and crimes against humanity relating to the conflict in Darfur. He denies the charges.

“His case must not be hurriedly tried in Sudan’s notoriously dysfunctional legal system. Justice must be served,” said Amnesty’s Joan Nyanyuki.

Bashir’s detention has failed to pacify protesters, who launched anti-government demonstrations in December and have for days been camped out in front of Khartoum’s army headquarters.

Journalists held a separate rally, along with university students and scores of women from a Facebook group who call themselves “the Information Network of the Revolution”.

The women — who include doctors, lawyers and teachers — are renowned for monitoring security agents who target protesters and publishing their information online in order to hold them to account.

Later in the evening crowds of protesters flocked through Khartoum to join the sit-in chanting “revolution, revolution”, an AFP correspondent reported.

Sudan’s military rulers have made some concessions, including the sacking Tuesday of prosecutor general Omer Ahmed Mohamed, but demonstrators fear their uprising could be hijacked.

“We faced tear gas, many of us were jailed. We have been shot and many have died. All this because we said what we wanted to,” Fadia Khalaf told AFP.

Khalid Mohamed, a medic, said: “We got Bashir out, but we still have to get rid of the regime”.

Officials say at least 65 people have been killed in protest-related violence since December, with some of the dead memorialised in a Khartoum mural.