What Gowon told Nigerians to do to Shagari 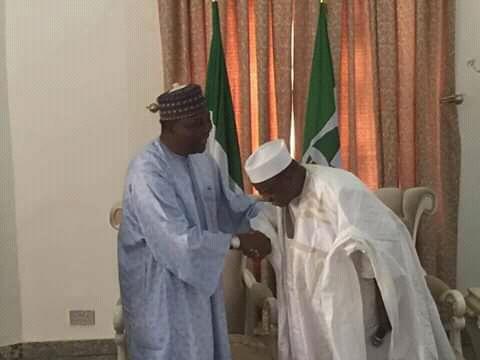 Gowon, who was in Sokoto on Wednesday condoled with the family of late Shagari, describing him as an amiable leader that meant well for Nigeria and the world at large.

He called on Nigerians to imbibe the good habits of forgiveness, simplicity and integrity of the late former President.

”I am in Sokoto physically to extend my condolence to government and people of Sokoto over the demise of Shagari.

“It is better late than not. I was in UK on treatment and holiday when the sad incident occurred,” he said.

Gowon, who was received by Gov. Tambuwal, described the deceased as an epitome of integrity with deep commitment to Nigeria.

He recalled that, during his military regime, Shagari served as Federal Commissioner for Finance against his (Shagari) wish, because he preferred the ministry of education, adding that the deceased was honest and transparent.

“Shagari played a key role in the development of Nigeria, facilitating the construction of the second Niger bridge and establishment of present Federal Capital Territory (FCT) Abuja, during my period as well as when become elected President.

“Shagari should not be mourned, but celebrated as a true, honest and sincere leader who was a nationalist to the core. Nigeria has lost a gem.

“Shagari is a true intimate colleague, his life is embodiment of truth to celebrate.

“We, Nigerians, should learn lessons from his patriotism, which he taught, as well as habits of forgiveness,” he said.

Responding on behalf of the family, Shagari’s son, Bala, appreciated Gowon for the visit.

At the Government House, Gov. Tambuwal also lauded Gowon for his and described the visit as home coming, noting that the former Head of State had earlier sent condolence and called the family on phone.

Tambuwal said great leaders had made enormous sacrifices in the struggle for the unity and the development of the country.

Speaking from his palace, Sultan Abubakar III enjoined present leaders to emulate past leaders’ sacrifices to the nation’s peace, stability and progress.

The monarch cautioned political leaders against breeding disunity, which hinders the nation’s progress.

The News Agency of Nigeria (NAN) reports that Shagari died at the age of 93 on Dec. 28,2018, at the National Hospital Abuja.

He was buried on Dec. 29, 2018 in his home town, Shagari in Shagari Local Government Area of Sokoto State.