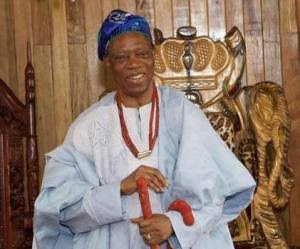 President Muhammadu Buhari has condoled with the family of Oba Folagbade Olateru-Olagbegi, the Olowo of Owo and the people of Owo in Ondo State on the death of the highly revered traditional ruler.

The president, in a condolence message issue by his Special Adviser on Media and Publicity, Mr Femi Adesina, in Abuja on Thursday, also commiserated with the government and people of Ondo on the demise of the traditional ruler.

The President affirmed that the late royal father was recognised as an accomplished legal luminary and tutor who played an exemplary role in the training and development of lawyers in the country during his days as a teacher in Nigeria Law School.

According to the president, the departed monarch will be fondly remembered and honoured for his numerous social, economic, educational, peace building and community development initiatives, which greatly endeared him to people in his domain and other admirers across the country.

The President assured that his thoughts and prayers are with the people of Owo and Ondo as they prepare for the burial rites of the Olowo.

He prayed that the almighty God would receive the soul of Oba Olateru-Olagbegi, who was former Chairman of the Ondo State Council of Obas, and grant his people a worthy successor.