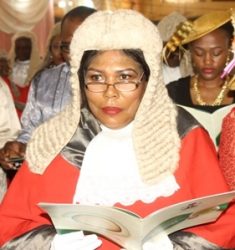 Judiciary workers in Edo State have been charged to be hard-working and give in their best while in service.

The Chief Judge of the State, Justice Esohe Ikpomwen, gave the charge while presenting an award of recognition to Mrs. Cecilia Audu, a Deputy Director in the State High Court.

The award was given by a Benin-based lawyer and philanthropist, Barr. Afolabi Olayiwola, to coincide with his annual scholarship award to indigent students in the state.

While presenting the award at an event held at the State High Court 1, Justice Ikpomwen urged all judiciary workers to be diligent at their duty posts.

She noted that no matter where they serve, they would be noticed, recognised and rewarded, even from the unlikely sources.

He said: “I am proud, I am glad that we have one hard-working and dedicated staff, and I know that there are many more, but Mr. Afolabi has picked on one and I too have noted her. We are grateful to you for this.

“This shows that no matter where you serve, people will notice you. It is the establishment (department) that should be doing this, to pick out hard-working officers and reward them accordingly. We don’t have the wherewithal to do that, but we are grateful that the Lord is using Mr. Afolabi to do that.”

Earlier in his speech, Barr. Afolabi said the presentation was a “wake-up call to all and sundry who have been privilege to occupy a sensitive place in our society to pause a little and give back a little of what life has graciously given them.

“I commend each and everyone of us to take up this challenge and positively respond in appreciation to the good deeds of folks around us and in emphath and held to this pains and needs of the helpless lot in our society,” he said.

A 50 kg bag of rice, a copy of the Bible and other Christian literature were also given to the students.