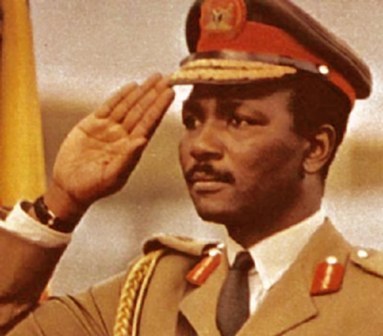 The soldier who nipped the coup in the bud and ensured it failed miserably was Gowon. Lt Col Yakubu ‘Jack’ Gowon left the shores of the country on May 1965. He was then Adjutant General at the Army HQ. Because of his distinguished performance in Congo Peacekeeping mission, he was asked to attend the elite Joint Services Course at Latima House, Buckinghamshire, UK. The course was designed for lieutenant colonels on how to plan and execute tri-service operations. While the course was drawing to an end, the Army HQ told him that he was coming home to become the commander of the 2nd battalion, in Ikeja Lagos. His ship docked at Apapa Wharf, Lagos, on the morning of Thursday, 13th January 1966 and Lieutenant T. Hamman, a brigade staff officer was sent by Ifeajuna, to pick him up. (Gowon and Ifeajuna were both 31 years old.)

Gowon’s heartthrob, Edith Ike was there to welcome him too dressed for the occasion. Jack did not inform her of his arrival date but her network within the Army HQ kept her alerted and ensured she was neither surprised nor outmanoeuvred by fast-eyed competitors whose rears were so shapely and soft as if Lagos lagoon was stored in their back pockets. Lt Colonel Hillary Njoku the erstwhile commander of the 2nd battalion had been reassigned to the NMTC in Kaduna. He was slated to vacate his residence on January 16. Ifeajuna then offered Gowon a reservation at the posh Ikoyi Hotel pending the time Njoku left. Gowon then went to see Lt Colonel Pam at No 8 Ikoyi Crescent Ikoyi whereas Adjutant General, Gowon used to live before he went on course in England. He wanted to stay with him for some few days and catch up what he had missed about the army and the country. Pam’s twins Ishaku and Ishaya and the girls Jummai and Kaneng rejoiced “Uncle Jack!! Welcome Uncle Jack!!” when they saw Gowon filling up their doorway. Pam and Gowon were both on the Editorial Board of the influential army journal, The Nigerian Magazine. They were also both from Middle-Belt region though Gowon was Anagas and Pam was Birom. Pam was the first officer in the Army from the Middle Belt. Pam advised Gowon that since he would soon take over from 2nd battalion, he should rather be close to Ikeja not be in Ikoyi. Had Gowon accepted Ifeajuna’s Ikoyi Hotel reservation, he would have ended up like Abogo Largema. Had he stayed with Pam, he would have been slayed like Pam.

On Friday, the morning of 14th January, Gowon went to the brigade headquarters in Apapa to see Brigadier Zakariya Maimalari the head of the brigade under whose formation he was would serve. Largema, the CO of 4th Battalion in Ibadan was there too attending the Brigade Training Conference. Major M.O. Nzefili, Largema’s second in command called in from Ibadan that the Western Region’s police commissioner, Chief Odofin Bello came to the barracks to request a detachment for some IS operations. It was Maimalari who later called Nzefili back. He told him to tell the commissioner to place his request via Army HQ. Maimalari’s intention with the cost implications. He had argued that his brigade’s men, arms and ammunition, his supply and transport were being used to provide internal security for the West’s political crisis hence his brigade deserved more appropriations.

Maimalari had also circulated a signal signed by Ironsi that certain unnamed officers backed up by politicians were planning to cause trouble. He asked his commanders to tighten security when they get back to their units and to warn all their subordinates against disloyal acts. The influencing politicians he was referring to was notably Mbazulike Amaechi an MP and NCNC’s publicity secretary, RN Okafor an MP who was on that day appointed the minister of state for trade, and Paul Nwokedi. They had befriended Donatus Okafor the CO of Federal Guards and was always seen most evenings going to Okafor’s residence in the evenings to lecture him about Revolution, Armed Struggle, Current Affairs and the need for a conscious Army. Ademulegun too had cause to report Nzeogwu to first his boss Col Shodeinde and then to the Army HQ in Lagos which supervised the NMTC. Captain Udowoid complained to Ademulegun through a letter that Nzeogwu’s lectures had become extended sermons of political bitterness that had little to do with military training. Ademulegun in his report wrote that Nzeogwu was “a young man in a hurry that needed to be watched.” Ironsi and Maimalari never envisaged that the human intelligence they received had a false estimate of the scale of what was being planned. It was not just some mere disturbance but a full-fledged treasonable mutiny that would take the army leadership down with it.

Maimalari then officially welcomed Gowon to the Brigade and told him of the cocktail party at his residence that night. Ironsi was there too and being the special guest of honour, he told Gowon he had to be there. Gowon politely declined saying his sweetheart who came to welcome him had to be taken back safely to University College Ibadan. She was in the middle of her exams. But Ironsi did not accept the excuse. He told Gowon:
‘Edith Ike? We know her. Bring her to the party. That’s an order.’