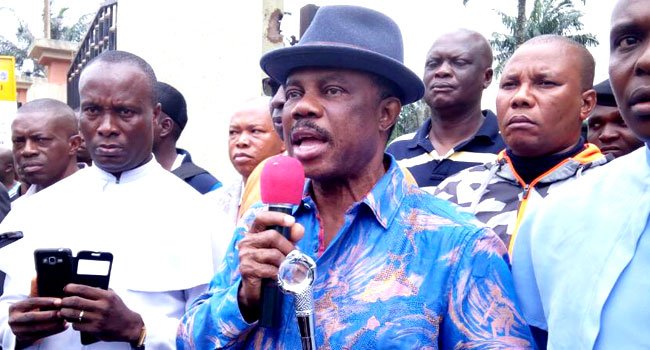 Anambra Government has announced a N5 million reward for any credible information that will lead to the arrest of the killers of former Anambra lawmaker, Chief Frank Igboka.

Igboka, the President-General of Nimo Community in Njikoka Local Government Area (LGA) of the state was shot dead by unknown gunmen at Oye Nimo (market area) around 8pm on Tuesday.

The Police Public Relations Officer in the state, SP Haruna Mohammed, stated this in a statement on Wednesday in Awka.

Mohammed stated that Gov. Willie Obiano made the offer in order to encourage people to volunteer useful information that could lead to the arrest of the perpetrators.

He stated: “In view of the foregoing, the public are requested to assist the command with useful information through the following emergency number 0703 919 4332 for prompt response.

“The governor has also directed the Commissioner of Police (CP), Mr Mustapha Dandaura, to personally lead the team to apprehend the killers immediately,” Mohammed stated.

Meanwhile, Mr C-Don Adinuba, the Commissioner for Information and Public Enlightenment, also stated in another statement made available to newsmen that government received the news of the killing of Igboka with shock.

Adinuba said that the governor was briefed on the gruesome murder by the CP shortly after the dastardly act.

He quoted the governor to have described the killing as utterly heartless, noting that the deceased’s elder brother, who was a former Nigerian diplomat, Chief Charles Igboka, died barely two weeks ago and had yet to be buried.

“It is a shame that the killing of the former lawmaker should take place in the week leading to Easter when men and women of goodwill throughout the world are reconciling themselves with God and fellow human beings.

“His father, Vincent Igboka, a distinguished papal knight, was a great Christian missionary who devoted his whole life to the spread of the gospel.

“He worked in such a way that he is being considered for canonization in some quarters,” the statement added.

The commissioner further stated that the Governor also directed the Department of State Security, the Army and Navy as well as the Nigerian Security and Civil Defence Corps to join the the police in the task to apprehend the perpetrators as quickly as possible.