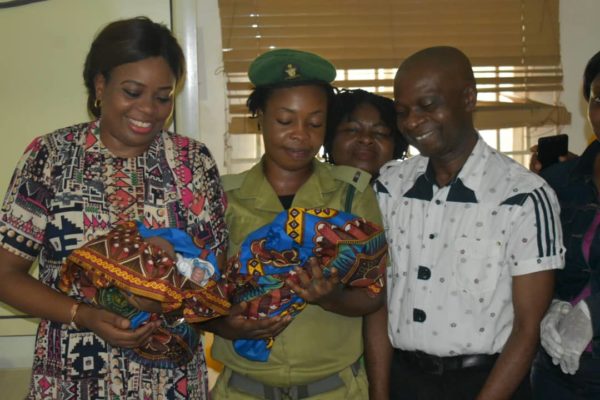 From left: Cross River State Commissioner for Health, Dr Inyang Asibong and other staff of Afokang Prison, Calabar, holding the twins delivered by a female inmate of the Prison in Calabar

A female inmate of the Afokang prison, Calabar (name withheld), has given birth to twins, a boy and girl, the News Agency of Nigeria reports.

The state Commissioner for Health, Dr Inyang Asibong, told NAN on Saturday in Calabar that the lady gave birth to the twins on Thursday at the Prison yard in Calabar.

The commissioner said she received a distress call from the prison authorities about an inmate with complicated labour issues.

She disclosed that her team immediately swung into action to provide health services to the inmate.

“The Cross River Government has taken responsibility for a set of twins delivered by a female inmate of the Calabar Prisons.

“The lady was delivered of a set of twins, a boy and a girl, and unfortunately developed some postpartum morbidity and had to be referred for expert management.

“While awaiting full recovery of the mother. This also highlights the magnanimity of the governor in ensuring no child goes to bed hungry,” she said.

She said the prison authority commended the State Government for the swift response in arresting the situation following her critical condition.

When NAN correspondent visited the prisons, the authority could not disclose the identity of the lady, saying it was classified as she was still an inmate.

An officer who was said to have pleaded anonymity, said the lady was currently receiving treatment in a medical facility in Calabar.