Scavengers: We don’t steal, we only value waste products 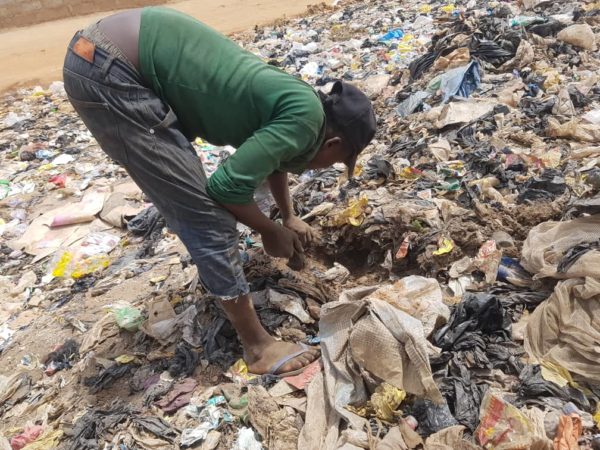 Scavengers in the Federal Capital Territory (FCT) on Saturday said that they are not thieves as believed in some quarters.

They said that they don’t steal residents items but only earn a living by picking waste products which they value and get paid for it.

Some of them, found at dumpsites at Karon-majigi area, where they turn out in their numbers to pick waste, said the society needed to change this wrong perception.

A scavenger is a person who picks items from dumpsites mainly for the purpose of recycling for personal use or sale.

In Nigeria, they are popularly referred to as Bola Bola, Gon-Gon, Mai Bola or Baban Bola.

A visit to Karon-majigi community showed that dumpsites on daily basis are transformed to treasure mines as both young and old men depends on it for a living.

Mr Nasir Sani, a scavenger for two years, revealed that he picks nails, bottles, plastics but he mainly picks metal products as he earns more from nails than other waste products.

“I don’t like picking bottles and plastics, as they earn me less money because each kilo goes for N20 to N40, which will not help my financial situation,” he said.

According to him, residents always refer to them as thieves that steal household items, adding that they only pick dumped items.

Mr Isah Salisu, another scavenger in the area explained that rainy season is the best period for scavenging.

He said that during the rainy season, he makes more money from plastic because his colleagues travel to their villages for farming.

“Rainy season is usually the best season for my work because each time it rains, it helps wash out the disposed refuse, most especially the plastic cans which I mainly pick.

“I gathered more plastic containers and sell during the rainy season, sometimes I earn N3000 to N4000 per week because other scavengers travel to their home town to farm and I don’t farm.”

Mr Adamu Mohammed said that he endures the hazard on the job because it put food on his table and helps him meet other needs.

“This has great effects on my health. Most of the time I have eye irritation, coughing, sneezing; skin diseases, and injuries from stepping on sharp objects such as broken bottles, nails and irons at the dumpsite.

“Sometimes, I have backaches and headaches from bending to pick items at dumpsites and working in the sun for long periods of time.

“Also, some residents of Karon-majigi think we steal from them. I can’t say for others but I would rather be a Mai Bola than an armed robber or thief.

“After picking the waste products, we usually take them to the dealers at a different part of Karon-majigi, who are normally referred to as bola collectors, they buy the items from us.”

Malam Sani Mohammed, who buy items from scavengers, explained that scavengers all over Karon-majigi sell products to them, as it’s better than going to Dei-dei or Gwagwalada.

“We buy more products during the rainy season, as rain wash the plastics and bottles and most of the scavengers travel home. The few that are around get to pick more daily and people tend to dump more refuse during the season.

“Normally, the recycling companies from the town come to buy from us for recycling purposes.

Another dealer, Abubakar Ado explained that the amount he makes from buying and selling waste products are not really encouraging.

“I will stop this work for a better one, I don’t earn much money from it as the companies get it cheap from us and the scavengers mostly insist on higher prices.

“Normally a kilo of metal is N50, plastic containers N20 and bottles N40 per kilo,” he added.

Recycling is a very prospective business in Nigeria if individuals and investors can look into it to reduce emissions.