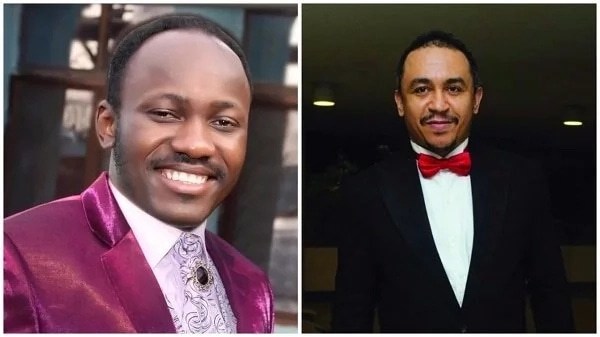 Founder of the Free Nation movement, Daddy Freeze has reacted to comment by the General Overseer of Omega Fire Ministries International, Apostle Johnson Suleman, that pastors have the power to shut down bloggers who wrote something negative about them.

According to Suleman, during a sermon, “A blogger posted something about my father in the lord about 3 days ago and I sent him a message saying I am giving him six hours to take it down or he would not like me. You know these bloggers, it wouldn’t take anything to close them. How many people do we need to report a page? The church has got the numbers to mess up bloggers. I will only direct the Choristers on a page to report and they will shut it down.

“You want drama, we will give you. That we are keeping quiet doesn’t mean bloggers should try nonsense, we can shut you down. What does it take to shut down an Instagram page? 100 to 200 reports and they will shut it down. If it comes up under three months, we report it again. Since you face the church, we face you. But we are giving you means of livelihood, don’t abuse it.”

Reacting to this, Freeze said he did not subscribe that any pastor or group of people could threaten to shut down bloggers.

“I do not subscribe to the notion that any pastor or group of individuals can threaten to stifle the voice of their opposition, I will never stand with that. However, I implore bloggers to also go the extra mile to verify the information they post, so as not to attract unnecessary controversy. This is what we do in the FreeNation in Christ.

“Furthermore, I will also not support attacks aimed at individual pastors instead of doctrinal differences. Now, following my recent series of encounters with some of these so called social media ‘reformers’, a vast number of whom are much worse than the pastors they condemn, I arrived at the realization that they do not know God, or have any intention of propagating his word, instead they are simply riding on this reformation platform for personal gratification and to grow their otherwise anorexic social media following.

“This in my opinion, if left unaddressed, will result in the consummate conflagration of our faith, which is in direct conflict with our desired goal, that is to take the word of Yahushua, the true son of Yahweh, to the world. So via this medium, I hereby declare that the FreeNation in Christ is a stand alone body of true worshippers, with no affiliation to any individual or group of reformers,” Freeze said.