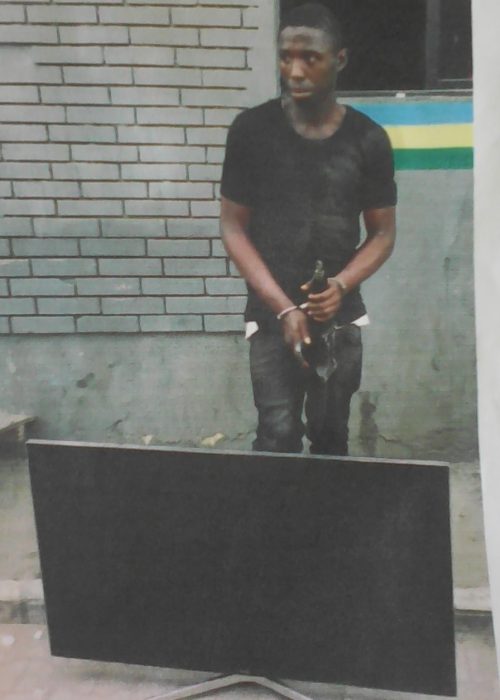 The Police at Ajah Division, Ajah area of the Lagos State Police Command, Lagos, have arrested a 20-year old dry cleaner, Promise David for allegedly breaking into an apartment at Thomas Estate, Ajah to steal some electronics and Plasma televisions valued at N1,482,500 belonging to Mrs Ifeoma Lokomari.

Police alleged that the suspect jumped over the Estate fence by 3am to burgle the apartment to steal the properties after the complainant had traveled.

Also arrested with the suspect was one Sunday Emmanuel, 36, a taxi driver who allegedly assisted him to convey the stolen properties to a buyer at Abraham Adesanya area of Ajah where they were arrested by a police team on patrol and taken to the station

During investigation, the suspect allegedly confessed to the crime and said that he allegedly jumped over the Estate fence with his friend now at large by 3am to gain access into the Estate to burgle the apartment to steal the properties, saying that he took to stealing after he lost his dry cleaning job and his mother and Father in 2017.

In his alleged confession to the Police, the taxi driver, Emmanuel, a resident of Idowu Estate, Okera, Ajah, Lagos from Ilesha, Osun State allegedly stated: “The suspect came to my park to hire me to help him convey some electronics and Plasma TV to Abraham Adesanya area of Ajah and I charged him N3,000 for the fare unknown to me that the suspect allegedly stole the properties.

“I got to know that the suspect stole the properties when some policemen on patrol swooped on us while we were offloading the electronics and took us to the station,” Emmanuel said.

The suspects were charged before the Igbosere Magistrates’ Court on a four-count of stealing 48 and 32 inches Plasma TV and other electrons gadgets.

Police counsel, Reuben Solomon told the court in charge No C/29/2019 thatthe accused committed the offence on 26 March, 2019 at about 3am at 3A, Lewis Fadipe Lane, Thomas Estate, Ajah, Lagos.

Solomon informed the court that the accused jumped over the fence at about 3am to gain access into Thomas Estate, Ajah, Lagos to burgle the apartment belonging to the complainant and stole properties valued N1,482,500 before nemesis caught up with him and the taxi driver who assisted him to convey the stolen properties to a buyer.

The accused, however, pleaded not guilty to the alleged crime and Magistrate K.K Awoyinka granted them bail in the sum of N150,000 each with two sureties each in like sum.