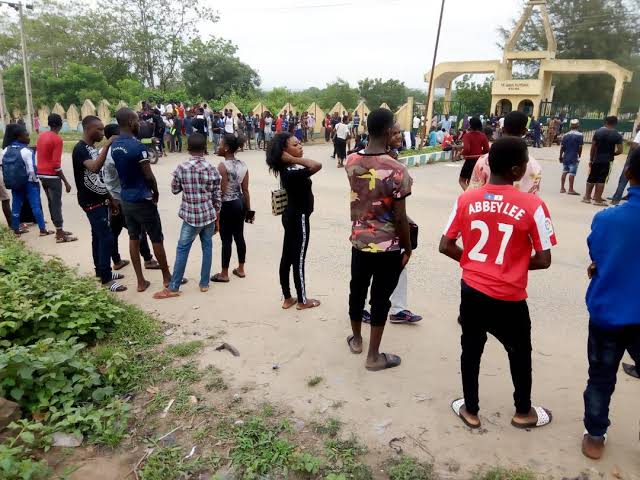 The ex-students of Ibarapa Polytechnic, Oyo State, on Wednesday staged a protest that grounded academic activities for failure of the institution to issue certificates as well as mobilise them for the mandatory one year National Youth Service Corp, NYSC.

The students, who have graduated for the past two years but were yet to get their certificates and unable to serve the nation shut down the main gate leading to the school premises.

The protesting students, while fielding questions from the newsmen noted that the protest would not have been necessary if the institution’s authority had fulfilled its promise of holding a meeting with them around 8am as agreed, adding “We have not heard anything about this issue since our last protest, all our effort to get in touch to the authority concern was proved abortive, our problems are yet to be attended to and we are here to show our grievances”.

Speaking on the issue, the National Senate President of the Federation of Oyo State Students Union, FOSSU, Comrade Wasiu Oke pointed out that the union was aware of what led to the protest, stressing that FOSSU as a student body was ready to take up the struggle and ensure that the matter was resolved on time.

“We want to urge the Oyo State Government to do their best to resolve this issue, the management of this institution in conjunction with the NBTE must also make ensure that this problem is resolve on time,” Oke stated.

Oke noted that the protesting students had been delayed unnecessary and that their problem had not been resolved, urging the concerned authority to find a lasting solution.

Also, the Chairman of the National Association of Nigerian Students NANS in Oyo State, Comrade Olujuwon Asubiojo said, “What we are requesting from the school management is to resolve this problem on time. The Oyo State Government should be ready to fund the accreditation and the management also should be accountable for all the money they have collected.”