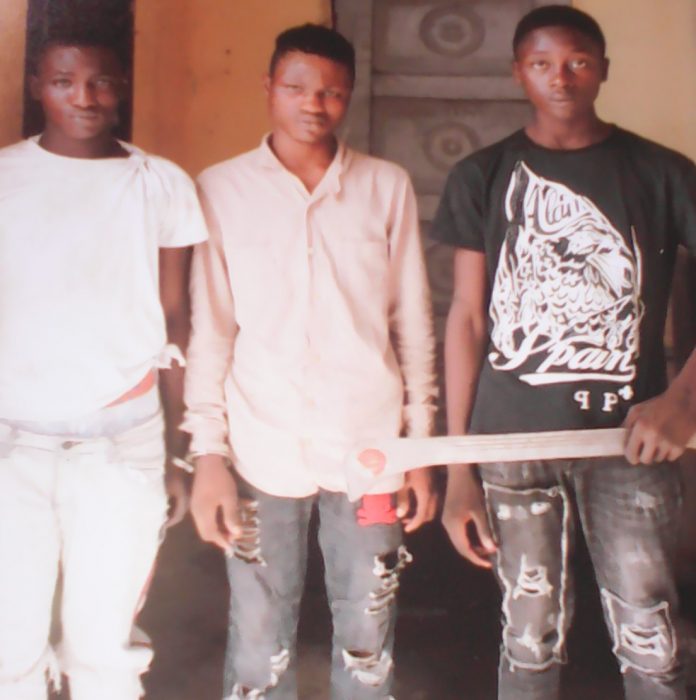 Operatives of the Federal Special Anti-robbery Squad, FSARS on Lagos Island, Lagos have arrested three robbery suspects whom the police alleged had been terrorising and robbing residents of Ijora- Badia area and commuters.

A police source alleged that nemesis caught up with the suspects on 14 April, 2019 when the Deputy Commissioner of Police, DCP in charge of FSARS, Lagos Island, Mr Kola Kamaldeen received a distress calls from residents of Ijora-Badia area of Lagos that robbery suspects had invaded their community and were robbing them with dangerous weapons.

The source disclosed that following the report, DCP Kamaldeen deployed a team led by SP Ibrahim Yusuf to the scene to arrest the suspects and restore order in the area.
.
On sighting the police, all the suspects took to their heels and the police chased after them and succeeded in arresting the three suspects while others managed to escaped.

Items recovered from the suspects, according to the Police. were a cutlass and one Faro phone belonging to one of the victim, Fatimat Ibrahim, a resident of Ijora- Badia, Lagos.

During investigation, the Police said the suspects allegedly confessed to the crime, but that they did not use guns in their operations, only cutlass, knife and iron rods, adding that they only harm victims who refused to surrender their belongings to them on demand.

The suspects were charged before the Igbosere Magistrate Court on a three-count of armed robbery.

The Plea of the accused persons was not taken as the Police Counsel, Abraham Fadipe prayed the court to remand the accused in Prison custody pending the advice from the Department of Public Prosecution, DPP on the matter.

After listening, Magistrate T.B Are ordered that the accused persons be remanded in prison custody for the first 30 days for DPP advice and adjourned the case till 25 May, 2019 for the report of DPP’s advice..