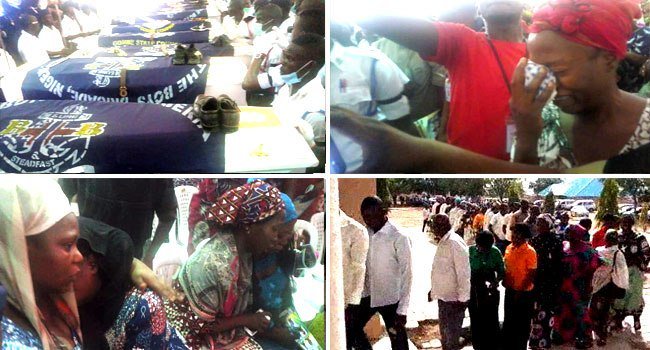 Weeping and wailing as 9 Boys Brigade laid to rest

There was weeping and wailing on Saturday as the remains of nine Boys Brigade who died in an accident in an Easter procession were buried in Gombe amidst tight security.

On April 22, a car driven by a member of Nigerian Security and Civil Defence Corps (NSCDC) ran into the youths while they were on procession.

The Gombe State Police Command, through its Public Relations Officer, Mary Malum, had confirmed the death of 10 persons from the incident, comprising eight members of the Boys Brigade and the NSCDC officer with his friend.

Prayers were offered for the souls of the deceased at the Christian Association of Nigeria (CAN) centre in Gombe, venue of the funeral.

Mr Charles Iliya, the Deputy Governor of Gombe State and other CAN executives, led by Rev. Ibrahim Jodah, CAN Chairman, Gombe State chapter, were present at the service.

Nine corpses, comprising six boys and three girls were laid at the funeral venue for burial.

The police command had on April 22, confirmed the death of eight members of Boys Brigade while 30 sustained various degrees of injuries from the accident.

However, there were reports that one of the injured died in Kano and was added to the eight for burial.

The youths were aged between 11 and 21 and were members of Boys Brigade of ECWA Church in Bogo, Barunde, Tabra and Madaki in Gombe state.

Earlier, there was pandemonium at Gombe Specialist Hospital when members of Boys Brigade went to retrieve remains of the youths and were stopped by youths at Jekadafari area of Gombe Metropolis.

As at the time of filing this report, the metropolis is calm as security operatives were seen patrolling major streets of the metropolis.