Man. City back to top after scrapy win at Burnley 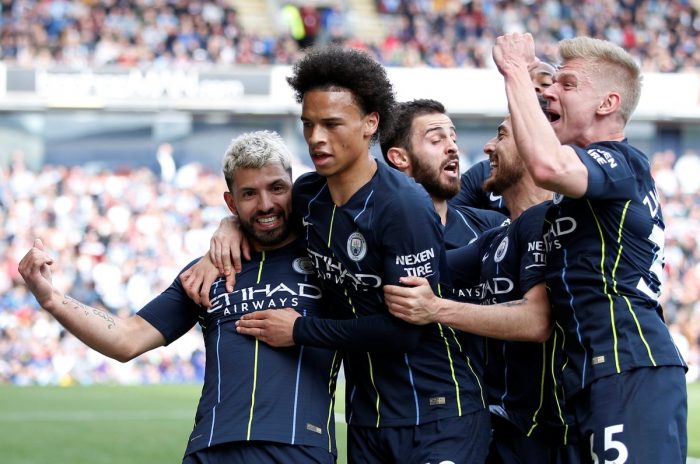 Aguero’s 64th-minute goal – bundled in and given via goal-line technology despite Matthew Lowton’s attempted clearance – summed up much of City’s performance as Burnley’s organisation and resilience threatened to keep them out.

Gabriel Jesus had another effort kicked off the line by Ben Mee and while Burnley rarely threatened, City knew only victory would do or the initiative would be handed back to Liverpool. It was duly secured with a 12th successive league win.

BBC reports that Burnley goalkeeper Tom Heaton also saved from Aguero, Aymeric Laporte and Bernardo Silva in a City performance that was average for long spells – but the main priority of three points was achieved and they know victory at home to Leicester City and away at Brighton will ensure they keep the crown.

City have been put to the test since their Champions League quarter-final exit against Tottenham – and they have responded in the manner of champions with three wins without conceding a goal.

And in Premier League victories at home to Spurs and here at Burnley, with a routine derby win at Manchester United sandwiched in between, they have had to show a different side of their character, one not associated with the flowing football which has become their trademark.

City were so sloppy in spells, with passes going astray and moves breaking down after moments of carelessness, that there must have been genuine anxiety at half-time that they would be the first to blink in this magnificent tit-for-tat title battle with Liverpool.

In the end it was Aguero, predictably, who made the decisive contribution, as he became only the second player in Premier League history to score 20 or more goals in five consecutive campaigns, after Thierry Henry between 2001-02 and 2005-06.

The goal, like City’s display, was not a thing of beauty but City’s players and their fans did not care as they celebrated another vital step forward on the road to the title at the end.