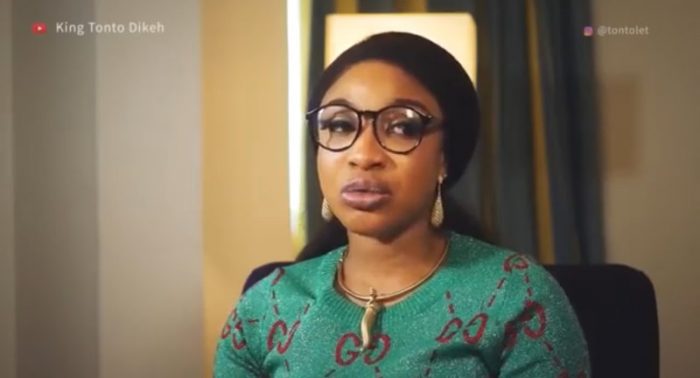 Actress Tonto Dikeh has gone public on her former husband, Olakunle Churchill, revealing details about their relationship, including what transpired in the bedroom.

She made the revelations in a three-part video published on her You Tube channel King Tonto Dikeh.

She spoke about how she met Churchill in a night club several years ago, after she just came out of another relationship that went sour and left her an emotional wreck.

For her, she clicked to Churchill to fill the emotional gap, after she lost a Mr.X that she had hoped would be her man for life.

In the video, she accused Churchill of smearing her in serial interviews, and in making the video, she wanted to set the records straight, for the sake of her son.

She spoke about her marriage and how it crashed, the various lies of Churchill and also accused him of being involved in fraudulent activities, known in Nigeria as “yahoo’.

“After I came back from giving birth to my son, I had been suspecting that he was into Yahoo…before I even came back to Nigeria I had already begun to suspect but the only thing that made me confirm was the night that he wasn’t supposed to be home and I slept early because of my son. I heard some noise in his room because he’s in the penthouse and my room is under.

“So, I heard a noise upstairs, nobody was supposed to be in that room. I opened up this room, I saw a full-grown man wearing a red cloth in his waist with red candles everywhere around him with a laptop in his hands. Immediately I saw that I was shocked, I was simply shocked. I was not scared but I was shocked. I just started laughing and he got me and that was one of the first fights we had after I had King.” Tonto said.