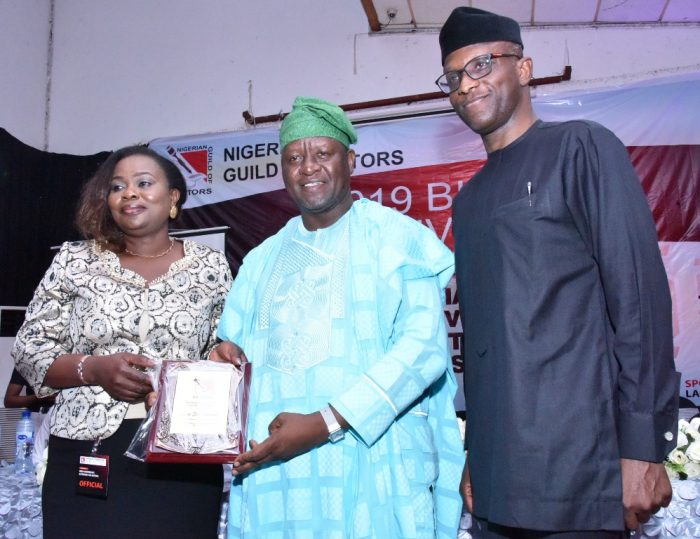 Representative of Lagos State Governor and Commissioner for Information & Strategy, Mr. Kehinde Bamigbetan (middle); Representative of the Vice President & SSA on Media to the VP, Mr Laolu Akande (left) and President, Nigerian Guild of Editors, Mrs Funke Egbemode (right) during the commendation award presentation to the Governor at Nigerian Guild of Editors Biennial Convention 2019 at the Lagos Airport Hotel, Ikeja, on Saturday,

Nigeria’s Vice President, Professor Yemi Osinbajo and Lagos State Governor, Mr. Akinwunmi Ambode on Saturday urged the media to continue to do everything within its powers to ensure that members adhere strictly to the code of ethics to preserve the sanctity of the profession.

The duo spoke at the 2019 Biennial Convention of the Nigerian Guild of Editors (NGE) held at the Airport Hotel in Ikeja, Lagos, well attended by members of the Guild from across the country.

In his goodwill message, Ambode who was represented by the Commissioner for Information and Strategy, Mr. Kehinde Bamigbetan said the media must continue to up the ante in its primary responsibility as the watchdog of the society.

Noting that the theme of the convention, ‘Media Convergence As Strategy For Survival’ was very apt, he said the State Government has drawn ideas and policy formation as well as execution from the criticisms and suggestions from the media.

“We have learnt from your informed commentaries, reflecting deep concern about the need for solutions to problems that all of us worry about uninterrupted electricity, efficient transportation, affordable housing and the ease of doing business.

“What we have witnessed in Lagos state in the past four years and particularly the commissioning of transformational projects in recent times bear testimony to the fact that your criticisms and suggestions towards a livable megacity have contributed to our policy formulation and execution,” he said.

The Governor alluded to the fact that his administration benefitted immensely from the coverage of landmark programmes and projects as media monitoring records revealed over 80 percent reportage of the State Government in the last four years was positive.

“I appeal that the guild continue to see the stables and the titles as stakeholders whose social responsibility to actualise the vision of a greater Lagos will be taken to the next level by my successor, Mr. Babajide Sanwo-Olu, the incoming governor,” he said.

Ambode also commended the Guild for the choice of Lagos as the venue of its conference, saying that it was not just a vote of confidence in his administration for building a safe and secure city, but also an editorial comment on the freedom of the press as a fundamental pillar of the democratic culture of Lagos State.

In his keynote address, Professor Osinbajo urged media practitioners to be open to the reality that the new and digital media was gradually taking over the traditional media.

The Vice President, however, said the greater worry was the fact that the new media had been saturated with several mushroom platforms, which do not regard the ethics of the profession in disseminating information.

“Editors must now take over the online media as seriously as they did to the traditional media and that move has to be unprecedented. What we see today is that instant reporting is making a mince meat of the virtues of cross checking facts before publishing.

“Since the role of editors is quality control and gate keeping, of the things they must do is to manage the new media and place some form of control. Some people must take the lead to speak up against the bastardization of the new media as it is gradually relegating investigative journalism,” Osinbajo said.

He also urged the media to invest in technology and continue to strive to ensure that they maintain their code of ethics, saying that failure to do this will be detrimental to the profession.

“I urge you to continue to abide by the journalism code of ethics of honesty, independence, accuracy, balance and public accountability. The time has come for editors to ensure that the thread of journalists of repute does not become a thing of the past.

The Vice President and Governor Ambode were later presented with commendation plagues by the Guild for their support and commitment to the media profession, while elections were conducted to elect new officers of the Guild.