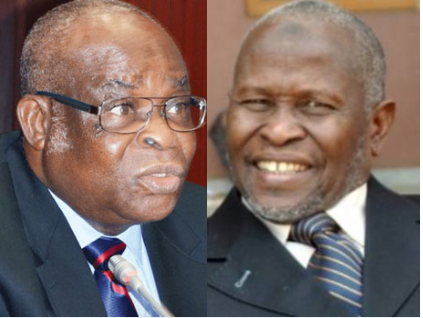 The court rejected an ex-parte application for an order stopping the president swearing-in Justice Muhammad as CJN.

Muhammad has been acting as the CJN since January when Buhari suspended the former CJN, Justice Walter Onnoghen.

With Onnoghen’s resignation and subsequent conviction by the Code of Conduct Tribunal, Muhammad is believed to be set to assume the office of the CJN in a substantive capacity.

The main suit filed by Malcom Omirhobo Foundation, a group being promoted and represented in court by a lawyer, Mr. Malcom Omirhobo, is challenging Muhammad’s fitness to hold the office of the CJN.

Justice Inyang Ekwo rejected the group’s ex-parte application requesting an order stopping Buhari from swearing-in the acting CJN in an acting capacity, in a ruling on Friday.

The enrolled order of the court was only sighted by The PUNCH on Monday.

Rather than grant the prayers contained in the ex parte application, the judge, in his ruling, directed the applicant to put all the seven defendants on notice.

Ex parte applications are characteristically conducted in the absence of the adverse parties.

But Justice Ekwo ruled that the prayers sought by the applicant in its ex parte application could not be granted in the defendants’ absence.

The 1st to the 7th defendants who are to show cause why Muhammad should not be sworn in as the CJN are, the National Judicial Council, the Federal Judicial Service Commission, the Acting CJN, Justice Tanko Muhammad; the Federal Government of Nigeria, President Buhari, the Attorney General of the Federation, and the National Assembly.

The plaintiff had in its substantive suit filed in April, alleged that Justice Muhammad made himself available as a tool that was used in the violation of the Constitution, especially with regards to the “illegal” removal of Justice Walter Onnoghen as the CJN.