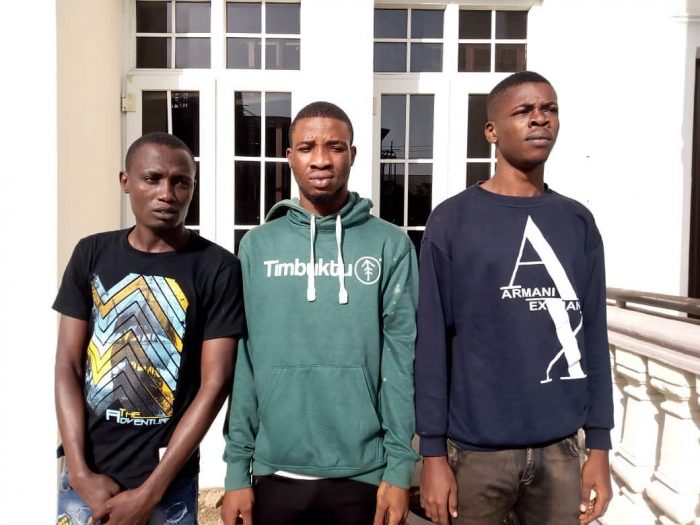 Iluobe, while posing as a Chinese, Huang Guang, fraudulently sent electronic messages to a Chinese woman promising her marriage. He further demanded the sum of $200 which his victim sent to him via Western Union.

Ovboke falsely portrayed himself as Lancelot Degory, a United States citizen, and succeeded in defrauding one Cheow Lim of $1,400, after he lied to her that he was going to meet her in Singapore where they were supposed to get married.

Paul on the other hand claimed he was a Construction Engineer based in Syria, and under that guise, he succeeded in defrauding one Simone Cardoso of £600 (Six Hundred Pounds) with a false promise of marriage.

The convicts were arraigned on separate charges and all three pleaded “guilty” to the one-count charge preferred against them by the Economic and Financial Crimes Commission, EFCC.

Before they were convicted and sentenced for their various offences, the prosecuting counsel, N.K. Ukoha prayed the court to allow his witness take the stand and review the facts of the cases.

The prosecution witness, Joseph Simon Akor, an EFCC operative, narrated how the convicts were arrested at different locations and on different dates, following intelligence gathered during surveillance.

He told the court that Paul was arrested on May 5, 2019 at his apartment on Charles Effiong Close, Satellite Town, Calabar, while Ovboke and Iluobe were arrested at Itagbor Agbeansa area of Calabar.

“During investigations, forensic analysis carried out on their laptops showed that they were into internet fraud as we saw all the electronic messages they used to dupe their victims,” he said.

After leading the witness in evidence, Ukoha then urged the court to convict and sentence them, accordingly.

While delivering judgement, Justice Riman sentenced Iluobe to two years in prison with an option of fine of N50,000, and ordered that the convict must restitute the entire sum of $200 (Two Hundred Dollars) to his victim.

Ovboke was sentenced to two years in prison with an option of fine of N100,000 and ordered to refund the sum of $1,400  to the victim as restitution.

Paul was also sentenced to two years in prison with an option of fine of N100,000. He was also ordered by the court to pay back £600 (Six Hundred Pounds) to the victim he defrauded.

The court also ordered that all three convicts forfeit every item recovered from them at the point of arrest to the Federal Government.

They are currently in prison where they’ll remain till they fulfilled the conditions given them by the court or serve out their prison terms.