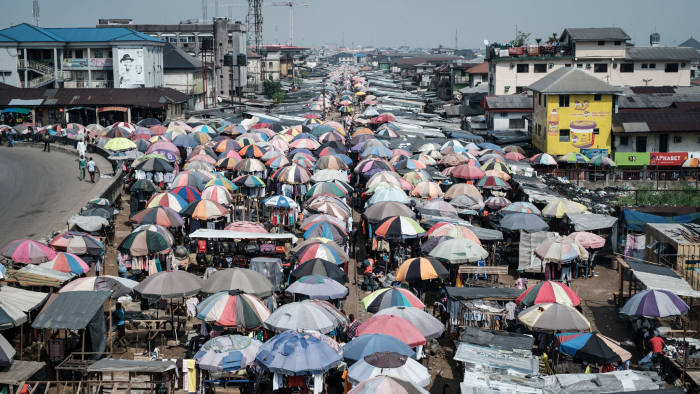 The African Union has urged Nigeria, the continent’s biggest economy, to join a new pan-African trade zone before the agreement comes into effect at the of the month.

The African Continental Free Trade Area will cut tariffs to zero on 90 per cent of goods for member states in an effort to bolster intra-African trade and growth. So far, 52 African countries have signed up, with only Eritrea, Benin and Nigeria still holding out.

“We are encouraging [Nigeria] to be among the founding parties and sign the agreement before May 30,” Albert Muchanga, the AU trade commissioner, said in an interview with the Financial Times at the regional body’s headquarters in Addis Ababa.

“Africa’s share of global trade is going to increase as a result of enlarging the domestic market,” he said. “It is in their interests to ratify.”

Intra-African commerce, which was worth about $170bn in 2017, accounts for approximately 15 per cent of the continent’s trade, according to the African Export-Import Bank. This compares with 67 per cent in the EU and 58 per cent in Asia.

By removing duties and addressing non-tariff barriers such as poor infrastructure and inefficient border posts, the AU hopes to help local companies grow by linking the continent’s small, fragmented economies in an integrated market of more than 1bn potential customers.

“Transform yourself to operate to the scale of the African Continental Free Trade Area. When you do that you will have the capacity to reach out to the rest of the world . . . That is the message we are conveying to the business people,” said Mr Muchanga.

Nigeria, Africa’s largest economy and most populous nation, has yet to be convinced, concerned that free trade could hurt local industry that already benefits from a domestic market of more than 190m people.

We need to understand the costs and benefits to the Nigerian economy, so that we can take whatever actions necessary to mitigate any negative implications

“But that is also why it’s so important that Nigeria’s participation is based on a clear understanding of . . . the agreement and the implications for Nigeria,” he said.

President Muhammadu Buhari has largely supported MAN’s go-slow approach, even as the country’s other main business lobby, the Nigerian Association of Chambers of Commerce, Industry, Mines and Agriculture, has backed the project. Mr Buhari has set up a commission to study the effect of the free trade zone and MAN said it wanted the report to be made public before Nigeria signed the agreement.

“We need to understand the costs and benefits to the Nigerian economy, so that we can take whatever actions necessary to mitigate any negative implications,” Mr Ahmed said.

The AU is aware that there will be short-term pain, particularly for countries that depend heavily on tariff revenue. It said member states would establish an adjustment facility to provide budget support to countries that faced a sudden revenue deficit.

Before that facility is in place, the African Export-Import Bank has agreed to provide a line of credit of up to $1.5bn to help member states meet any shortfall, while discussions with the World Bank are continuing, Mr Muchanga said.

“Theoretically we have about $2.5bn, which member states may or may not need,” he said.

Benedict Oramah, President of Afreximbank, said the facility would enable countries to “achieve an orderly adjustment” to the new regime and “facilitate expanded intra-regional trade”.

Of the 52 signatories, a threshold of 22 countries — including Ghana, Ethiopia and Kenya — have so far ratified the agreement, which will come into effect on May 30. The trade zone will then be operational for those countries from July 7.