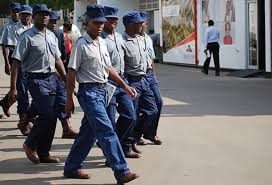 A security guard from Bulawayo, Zimbabwe is reported to have gone on the run after murdering his girlfriend over a text message.

The guard left a detailed note in which he outlined his reasons for the murder and threatened to kill the victim’s mother also.

The iharare.com quoted the Chronicle reports that Absolom Ndlovu who is employed by the Bulawayo City Council (BCC) strangled his girlfriend, Vonai Mhoya to death on Saturday night.

Apparently, the two had a major argument over a text message and had received counseling from Vonai’s mother earlier on that day.  After the mediation, the couple returned to their home where things seem to have degenerated resulting in Absolom allegedly murdering Vonai during the night and fled.

The following day, Vonai’s mother became concerned after her daughter was not picking up her phone calls well after 10 am.  She went to the couple’s home but found all the doors and windows locked.

However, she managed to open the door as she knew where the keys were hidden, only to discover the lifeless body of her daughter.

Part of the note Absolom left at the crime scene reads, “Nanso isiphetho sesiwule lonaLinda uyalandela. Lisale kuhle mawule afuze unina yimi elimzondayo elifuna imali yakhe. (This is the end result of prostitution and Linda’s mother is next. Farewell, you prostitutes who are like your mother. I’m the one you hate, whose money you are after).”