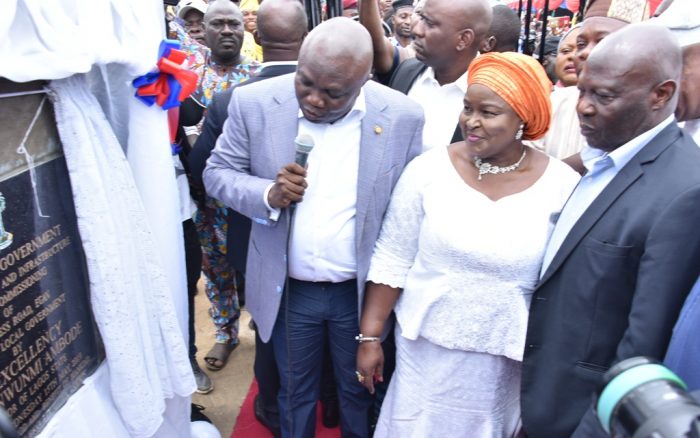 Lagos State Governor, Mr. Akinwunmi Ambode on Wednesday commissioned the Agric Access Road, Egan in Igando Ikotun Local Council Development Area (LCDA) and the Lagos Theatre in Igando as he gets set to exit office, saying that his administration has succeeded in its quest to transform the infrastructural landscape of the State with massive construction of critical roads and bridges.

The Governor, who also flagged off the construction of a link bridge connecting Egan and Ayobo communities, said he was fulfilled that his administration had delivered on its promise to run a government of inclusion that would leave no resident and area of the State behind.

“When our administration came into office, one of our cardinal promises was a government of inclusion. We committed to a government where nobody, community or people will be left behind. As a result we were determined to address the challenges of gross infrastructural deficit, flooding and erosion which the people around this senatorial district have lived with for some time now.

“I am very pleased and fulfilled to see that our commitment to make our State globally competitive and radically change our infrastructural profile to one that befits a contemporary smart city has been successful with the massive construction of roads and bridges we have undertaken in the last four years. We not only prioritized renewal and development of road infrastructure but we have done so using an all-inclusive approach that has touched rural and urban areas in the State,” he said.

He said that in constructing the Agric Access Road, the State Government took cognizance of the need to make commuting stress-free for pedestrians and motorists with wider roads and walkways, tackling flooding by providing adequate and covered drains, and street lights that would guarantee added safety and security for all road users.

The Governor expressed optimism that the roads constructed along the corridor would go a long way to create direct and indirect employment, increase connectivity and increase economic activity in the community and its environs.

“The unveiling of Agric Road Bamidele Kasali/Dosu Ekunrin Road today is a testimony to our passion to make our people happier, our roads better and our State safer. By this action, we are providing critical and needed infrastructure as well as reciprocating the support our government has enjoyed from this constituency in the last four years,” he said.

While imploring community, religious leaders and the people of Igando/Ikotun to guard the infrastructure jealously, he thanked Lagosians for their support and prayers, particularly in the discharge of their civic responsibility through payment of taxes.

“I believe strongly that our State is on a positive growth trajectory and I urge you to give the next administration the same unflinching support you gave us as we work together in transforming our State to the “Lagos of Our Dreams”, he said.

Governor Ambode said the State Government had already mobilized the contractor while work has started Egan-Ayobo Link Bridge, assuring that the incoming administration would see through the project to completion.

At the unveiling of 500-seater capacity Igando Theatre, Governor Ambode said the development was in accordance with his administration’s promise to create a new economy around Tourism, Hospitality, Entertainment and Sports, saying it was gratifying to note that a solid and long term foundation had been effectively laid to support a sustainable tourism and entertainment-driven economy.

He said with the unveiling, lovers of live theatre and the Arts would henceforth experience spectacular fun, adding that as the nation’s hub for commercial activities and entertainment, the State Government was providing key infrastructure to support growth as exemplified by the theatre.

He said the theatre, aside providing a platform for performances which would in turn bring revenue to artistes and entertainers, it would also go a long way to create opportunities for the tourism and hospitality sectors and the ripple effect would ultimately touch every aspect of the host communities.

“There is no State in the country that attracts visitors and new comers on daily basis as Lagos does. With our population, we have a large market for every sector. After the hustle and bustle of the day, people crave for entertainment and leisure. These theatres are built to provide for this need as well as creating jobs,” the Governor said.

In her goodwill message, Chairman of Igando-Ikotun Local Council Development Area (LCDA), Mrs Morenike Adesina-Williams commended Governor Ambode for the projects executed in the area, saying they would go a long way in enhancing the socio-economic development within the axis and the State in general.

“I wish to express our deep appreciation to the Governor for this laudable road project and the Theatre. We are aware of the deplorable state the road was but today the State Government has brought comfort and succor to people of Egan, Ayobo and all the people making use of this road.

“Also, the ground-breaking ceremony of the Egan-Ayobo link bridge is a thing of joy for us. This is a testament of the fact that your (Governor Ambode’s) administration has indeed provided good and qualitative social infrastructure across all divisions in Lagos State, particularly this road which will provide and enhance socio-economic development, investment and employment in this axis,” she said.

On his part, Onigando of Igando, Oba Lasisi Gbadamosi said the unveiling of the theatre was an emotional moment for him considering that Governor Ambode would be exiting office soon, just as he prayed that God would continue to bless and order the steps of the Governor.

“I want to profusely thank our Governor, Mr Akinwunmi Ambode for standing firmly and seeing this project through. If I open my mouth and start to talk about the good things the Governor has done in our community, the State in general and even personally for me, I may cry but I just pray that God will be with the Governor in all his endeavours,” Oba Gbadamosi said.

Some residents of the area- Mrs. Aderinola Adetola and Mrs. Folashade Olanrewaju, who spoke on the projects, commended the Governor saying that the road has transformed the axis and upgraded their standard of living.