The Transformation of Lagos Airport Road 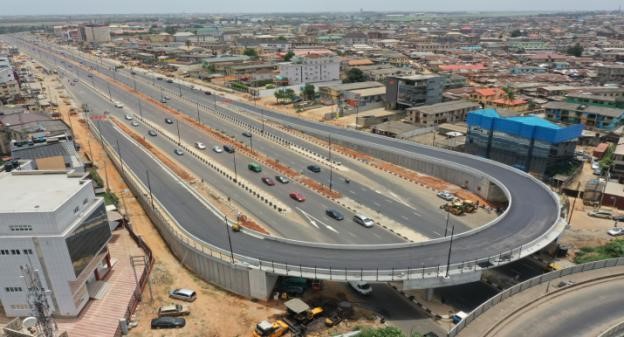 It is in view of its crucial role to achieving rapid economic growth that advanced nations of the world commit huge investment to infrastructural development. J.F. Kennedy, a former President of the United States of America, USA, once put the relationship between infrastructure development and economic prosperity into a proper perspective when he affirmed that: “America has good roads, not because America is rich, but America is rich because it has good roads”.

According to the World Bank, every 1% of government funds spent on infrastructure leads to an equivalent 1% increase in Gross Domestic Product (GDP), which invariably means that there is a correlation between any meaningful inputs in infrastructure development which reflects on economic growth, indices, hence the value of infrastructure cannot be underplayed.

It is, therefore, in an effort to ensure even and accelerated development in all parts of Lagos State, that the Lagos state government placed high premium on infrastructure development as evident in the construction and rehabilitation of road network across the state. It is, indeed, particularly soothing to note that the state government has placed a great emphasis on development of more inner roads in order to ease the peculiar Lagos traffic gridlock.

Not quite long ago, Lagos State Governor, Mr, Akinwunmi Ambode, played host to President Muhammadu Buhari as the latter embarked on a one-day working visit to Lagos State. Part of his mission was to inaugurate several landmark projects put in place by the state government to better the lots of Lagos residents.

Some of the key projects officially commissioned by the President include the 170 –bed Maternal and Child Medical Centre, popularly referred to as Ayinke House located on the premises of Lagos State University Teaching Hospital (LASUTH), Ikeja, the 500 – seater Lagos Theatre Oregun, the iconic Oshodi Transport Interchange and the 820 High and Medium Capacity Public Buses.

However, of particular concern to this piece is the remodeled 10- lane Muritala Mohammed International Airport Road. The road is one of the people oriented projects that were inaugurated by President Buhari during his one day working visit to Lagos.

Constructed between 1939 and 1947, the Lagos Airport Road is no doubt one of the oldest roads in the country. The Road which cuts through Ajao Estate and Mafoluku areas of Lagos terminates to join the network of roads connecting the Oshodi-Apapa Expressway to other parts of the City-State.

Considering its importance to local and foreign investors, tourists and many others, many have likened the Road to the famous “The King’s Highway” in the United States that is acclaimed the busiest road in the world with about 500,000 vehicles daily.

Unlike other roads in the country, the Lagos Airport Road clearly influences the first impression conceived by first time visitors to the country. Unfortunately, this much strategic Road had suffered gross neglect over the years. Its current state, no doubt, constitutes a serious dent on the image the country.

It is, thus, quite logical that Lagos residents were extremely enthusiastic when the State Government completed the reconstruction of the road. For a Government that has made improvement of infrastructure across the State a prime mission, the completion of the project represents another grand milestone in the life of the outgoing administration.

Being an investor’s friendly State, what the Lagos State Government has achieved with the reconstruction of the Lagos Airport Road is a masterpiece with aesthetic infrastructure and an explicit environment serenaded by street lights illuminating the 10 lane route to aid the convenience of local and foreign investors as well as residents along the route.

Though, a Federal Government responsibility, the Lagos State Government took up the enormous task of rebuilding the Road in view of its strategic importance to the socio-economic well being Lagos State and, indeed, Nigeria at large.

If governance is truly about adding value to people’s lives and propounding creative solutions to critical societal needs, then the Lagos State government is actually on the right path in its pact with the citizenry. Lagosians are implored to protect and preserve all major infrastructure in the state as they represent our collective heritage.

Ogunbiyi is of the Lagos State Ministry of Information and Strategy, Alausa, Ikeja