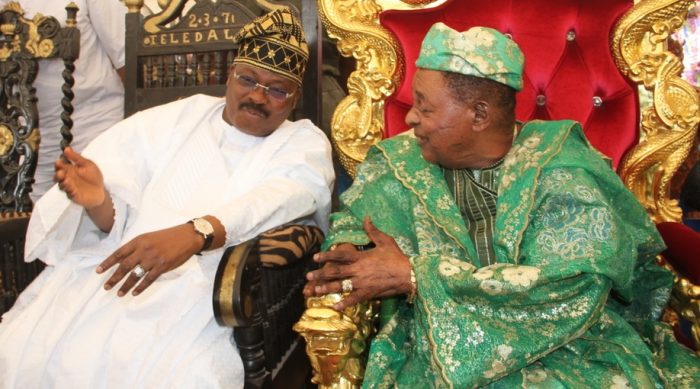 The Alaafin of Oyo, Oba Lamidi Adeyemi, has commended the out-going Governor of Oyo State, Senator Abiola Ajimobi for his unprecedented achievements in the last eight years, stressing that the state would always remember his good deeds.

The Alaafin gave the commendation when the governor paid him a visit in his palace while in the town to inaugurate the dual carriage way constructed by his administration, which is now named after the monarch.

He commended the governor as unique and visionary for immortalising statesmen and heroes of the state by naming monuments after them while they were alive.

Extolling what he called the virtues that set Ajimobi apart from his predecessors and most leaders, Alaafin said that the governor had by his gesture spurred the beneficiaries on to work even harder towards the greatness of the state.

Oba Adeyemi said, “We shall always remember you for good because of these achievements, which have far-reaching effects on the lives of our people. You have done so much to be remembered for, my governor. I read in the newspapers recently that you have named major projects after important people that have impacted on our dear state. This is highly commendable. It is unique and visionary. We should not wait for people to die before honoring them, after they might have contributed immensely to the progress of the society while alive. The name of the Olubadan now adorns the Eleyele-Dugbe-ANCE road as Oba Saliu Adetunji Road”.

He continued, “When you look at the age of Olubadan (90), you will appreciate this gesture better. He did not have to die before being honored. I’m sure he will not forget the governor for honoring him in his lifetime. I was overwhelmed when you (governor) contacted me to inquire about who had traversed the legal profession from the Oyo empire and I mentioned Justice Adejumo Kester, you responded that you trusted my judgment. We appreciate the governor for this honour. It is not common for people to be honored this way. This is a wakeup call to the people that we should do our utmost best for our societies always and for leaders to immortalize such people. I pray that we will have people like you in position of authority that will continue this trend”.

Alaafin further commended the governor for what he called his uncommon leadership acumen, which inspired the unprecedented achievements and growth of the state in all facets of human endeavors, including the enthronement of peace and security.

The monarch said it was noteworthy that Ajimobi had spent eight historic years that were devoid of brigandage, which he said aided the steady socio-economic development and growth of the state.

Responding, Ajimobi thanked the monarch for his fatherly role and support spanning his two tenures, which he said had proved bookmakers wrong.

On assumption of office in 2011, he said that pundits had predicted that his then robust relationship with Alaafin would not last long because of the monarchs known criticism of mediocrity and weak leadership.

Ajimobi said, “People predicted that my relationship with Baba Alaafin would not last on my assumption of office in 2011. I’m proud to tell them now that we are flexing daily in our relationship and this is the eighth year of my administration. No governor since the days of the Western Region had ruled the region or Oyo State for eight years, not even during the military misadventures. I want to sincerely thank Baba for his supportive roles and prayers, which contributed to our success story. I also thank the good people of Oyo State, including the people of Oyo for their love and support for me. I won elections in 2003 (Senate), 2011 and 2015 (governorship). So if I fail to win in 2019 (Senate), I still scored A1 or what you can call First Class”.

The governor said that the mediation centres were established by his administration as a practical demonstration of its repositioning agenda, particularly in enhancing peace, safety and security.

He said, “Dispute resolution is an important factor in our social existence and the more we all learn to live with our disagreements and take mutual steps towards amicable resolutions, the better for our society and communal harmony. This underscores the need to provide mediation services across all the zones of Oyo State. The outstanding success of the mediation centre at the ministry of justice in Ibadan provoked the conception and birth of the zonal centres, two of which are being commissioned today in Oyo and Ogbomoso zones. With today’s commissioning, Oyo State, under our leadership, would have fulfilled its electioneering promises of entrenching in the state an enduring peaceful co-existence and speedy dispensation of justice”.