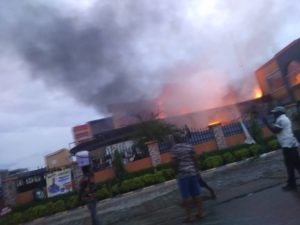 The popular and well sought after ‘Soul Lounge,’ in Kubwa, Abuja was gutted by fire on Thursday.

Mathias said according to inquiries made at the scene of the fire outbreak, the cause of the fire was suspected to be from a power surge on one of the bar sockets.

“It started from one of the sockets which powered several musical gadgets,” he said.

He applauded the efforts of people at the scene who tried to quench the fire before the arrival of fire fighters.

“Efforts to put the fire under control by the crowd was impressive but it was beyond them before our arrival,” he said.

Mathias, however, said that no life was lost as fun seekers at the bar and club were quick to evacuate the scene before it escalated.