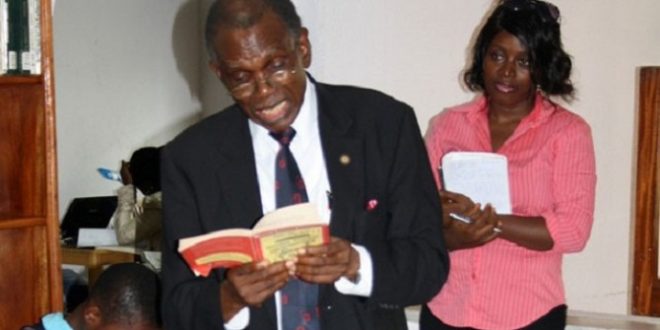 The Albino Foundation and the Coal City Literary Foundation on Thursday celebrated a renowned author and medical guru, Prof Anezionwu Okoro as he clocks 90 years.

Born May 17, 1929, the nonagenarian dermatologist is the author of many fictions, medicine/health, environmental sciences and ecology including One Week One Trouble, The Village School and the Village Headmaster.

Prof Anezi, as he is fondly called, has also written over 200 poems.

His recent publication is the translation of 10 Lamb’s tales of Shakespeare to Igbo language entitled, `Akuko Ufodu Shakespeare Koro’ in collaboration with another author, Mrs Nwobiara Chukwura.

Okoro, a native of Arondizuogu in Imo, is the first dermatologist in West Africa and the second in Africa.

Speaking at the event, Mr Jake Epelle, the National President and Founder of Albino Foundation said that the dermatologist was the brain behind the foundation.

According to Epelle, the Albino Foundation will not have been known without Prof Anezi who fought the cause of albinos since the 50s.

“His intervention in the lives of albinos has enabled us to have clearer skin,” he said.

He said that the author had lived his life purposefully and selflessly without being recognised nationally and thanked God for keeping him alive till 90.

In her remarks, the President of the Coal City Literary Foundation, (CCLF), Dr Adaobi Nwoye described the renowned author as a `formidable pillar of the foundation’.

Nwoye said that as the Chairman of CCLF Board, the professor had been in the forefront of its growth by encouraging and mentoring the young ones to imbibe the culture of reading and writing.

Mr Victor Atuonwu, former Chief of Staff to former Gov. Sullivan Chime and Gov. Ifeanyi Ugwuanyi of Enugu State expressed dismay that in spite of numerous contributions to national development, Okoro had not been recognised by any government.

“Prof Anezi Okoro was a member of NNPC board, yet he does not own an oil block; he was a board member, Universal Basic Education Commission (UBEC) and he came out unscathed during a scandal.

“Prof Okoro was instrumental to the site of the Federal Capital in Abuja, yet no street was named after him nor received any national honour,’’ he said.

Atuonwu described Okoro as the `only Nigerian that is not corrupt’ and urged the federal government and the South East Governors in particular to recognise and honour him in his lifetime and not posthumously.

Also speaking, the author’s wife, Dr Ese Anezi-Okoro said her husband was a loving and caring husband and father for over 50 years.

Ese who is a gynaecologist, disclosed that her husband refused several political appointments because of his commitment to the development of the University of Nigeria Teaching Hospital (UNTH).

She thanked the groups and friends for celebrating the professor saying that she would always cherish their kind gestures.

Responding, the nonagenarian thanked the groups for always celebrating and remembering him which he said was rewarding.

“I am even happier to be celebrated by the younger generation and friends. It is a great honour and I thank God for keeping me alive to see this day,’’ Okoro said.

Highlight of the occasion was the cutting of cake by the nonagenarian.