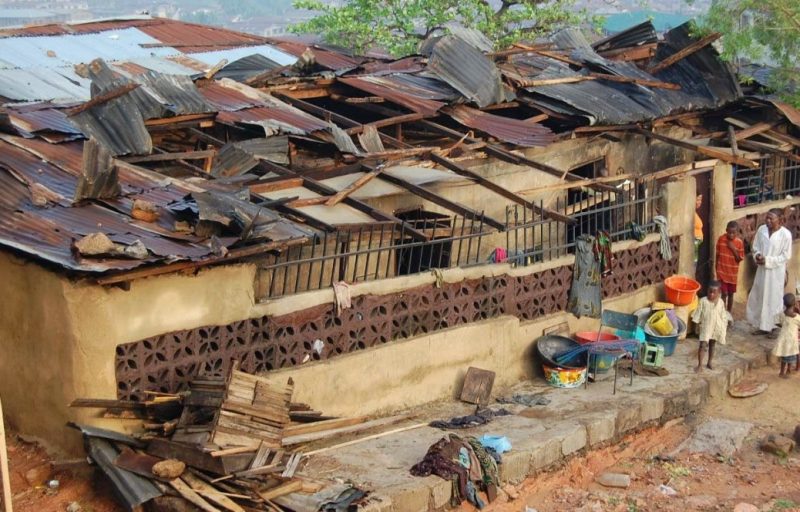 FILE PHOTO: Aftermath of a rainstorm

A rainstorm on Monday wreaked havoc in Kajola community in Ifo Local Government Area of Ogun.

The 45-minute rain, which began at 10 am, removed the roofs of many houses and shops, rendering many residents homeless.

Some of the residents, who spoke in separate interviews said the rainstorm was a tragedy.

They lamented that the community roads, which lacked drains and were already in a bad state, were made virtually impassable.

The residents, who appealed to the state government to come to their aid, said all the projects carried out in the community were through the efforts of the community’s landlord association.

A resident, Mr Akeem Rasheed, said he was shocked when the rainstorm began, forcing many to flee into their houses and shops for safety.

Another resident, Mrs Omolayo Bamgbose, said fear had gripped her during the rainstorm which brought down part of the house behind hers.

“I have never seen this kind of rainstorm before that has caused so much panic and fear. I am really touched by the predicament of residents who are affected,” Bamgbose said.

“I think this is a natural disaster that nobody prayed for, government should please come to the aid of residents who no longer have houses,” Shogunle said.

Mr Olawale Saliu, a respondent, said that residents of the community should pray against a repeat of such rainstorm.

Adekunle Adekoya, another community chieftain, expressed regrets at the damage caused by the rainstorm, adding that that the community had always lacked government presence.

“Most of the amenities we have here such as roads, electricity and others are efforts of the landlord association as government has neglected us here,” Adekoya said.

On his part, the Community Development Council Chairman, Mr Adio Mosaku, said that he was shocked when the rainstorm began.

“Many residents, including me, have been rendered homeless; the roof of my house was removed,” Mosaku said.