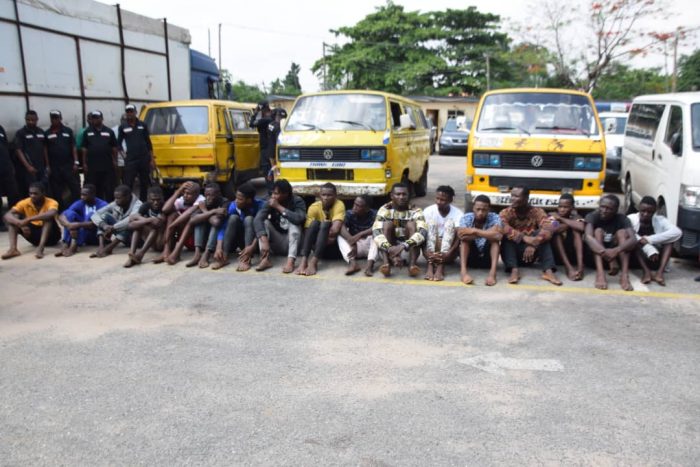 This was disclosed by the Commissioner of Police, Lagos State, Zubairu Muazu at a news conference and the launch of Operation Puff Adder on Thursday in Lagos, Southwest Nigeria.

According to Muazu, within the last four months, the Command arrested 159 suspects for armed robbery, kidnapping and cultism and recovered 43 arms and 84 ammunition.

“Our prompt response to distress calls helped in foiling 80 armed robbery attempts. 14 cases of suicide and attempted suicide were recorded,” he said.

Specifically, Muazu said the police succeeded in arresting 17 notorious cult leaders and recovery of nine pistols after an intelligence driven operation carried out by the Command’s Anti-cultism unit which lasted for four weeks, from 20th April, 2019 to 19th May, 2019 at identified cultists hideouts in Ayobo, Shogunle, Oshodi, Ajegunle, Apapa, Ikorodu, Ketu and Alapere.

Muazu also disclosed that traffic robbery were also arrested with arms recovered, adding that  on 8th May, 2019 at about 1400hrs, the command received an information that some armed men were sighted around Alagbado area.

“SARS and Alagbado Patrol teams were deployed to the scene. One Atanda Billaminum, 24yrs old was arrested with one locally made gun and two expended cartridges. In a related development, on 10th May, 2019 at about 2240hrs, we received an information that some group of armed robbers were sighted at Road ‘G’ Close, Festac Town, robbing unsuspecting members of the public of their valuables. Patrol teams from Festac Police Station and SARS were deployed to the scene. Two suspects, namely: Obinna Anozie ‘m’ 21 years old and Obinna Mbachu ‘m’ 27 years old were arrested. One locally made gun with three live cartridges were recovered.

“Also on the 15th May, 2019 at about 2300hrs, we received information that some armed robbers were sighted at Okoko Bus Stop, along Badagry Expressway robbing unsuspecting passer-bye of the valuables.Patrol teams from Okokomaiko Police Station and SARS were mobilized to the scene. Four suspects namely; Bashiru Ahmed ‘m’, 22 years old, Nasiru Adamu ‘m’, 22 years old Zaradeen Sani ‘m’ 23 years old and Suleiman Musa ‘m’ 24 years old were arrested and two guns with five unexpended cartridges were recovered,” he stated.

According to him, the police also arrest notorious motorcycle snatching syndicate, saying that “on 11th May, 2019, at about 0800 hours, one Mr. Saheed Ambali ‘m’ of No. 4, Kayode Aina Street, Ayobo Ipaja, Lagos reported at Ipaja Police Station that three male suspects stopped him on the road at Fagbemi Street, Ipaja, and request that he should conveyed them to Ipaja Bus stop but he refused. The suspects used cutlass and knife to inflict deep cuts on the victim’s head and right tight. Three suspects, namely: Lateef Adeleke ‘m’ Bashirun Lekan ‘m’ and Chinedu Ugozie ‘m’ were arrested and the motorcycle was recovered. The suspects confessed to be responsible for series of motorcycle snatching in Lagos.”