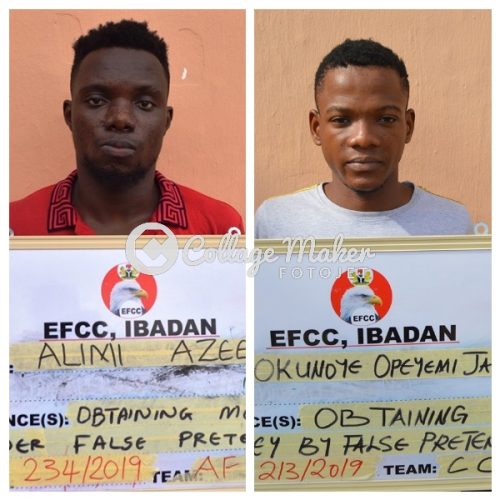 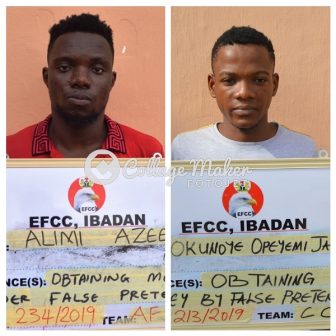 Three of the convicts, Alimi Azeez Oluwadamilare, Paul Opeyemi Omotunde and Igberase Hope Odianosen were tried in the Federal High Court, Abeokuta Division, while the other, Okuneye Opeyemi James,was tried at the Ibadan Division of the court.

Alimi, a member of the National Youth Service Corps, NYSC, and Omotunde, a 2019 graduate from the Federal University of Agriculture, FUNAAB, were convicted and sentenced to four months in prison by Justice Ibrahim Watilat of Federal High Court 1, Abeokuta.

The trio were re-arraigned on a one-count amended charge of criminal impersonation, contrary to Section 22 (2)(b)(iv) of the Cyber Crime Prohibition Prevention Act, 2015 and punishable under the same Act.

The fresh arraignments were sequel to the plea bargain arrangements between them and the EFCC which reduced the number of charges in the initial charge sheets to one.

Besides sending them to jail, the presiding judges also ordered that they refund sums of money in United States Dollars to their respective victims as restitution.

All items recovered from them during their interrogation are equally to be forfeited to the Federal Government.

He was arrested for internet-related offences on April 11 by officers of the Nigeria Police Force who later handed him over to the Ibadan zonal office of the EFCC for further investigation.

Investigations by the Commission revealed that the convict’s modus operandi was to illegally hack into people’s accounts to gain unrestricted access to vital and sensitive information, and covert same to fraudulent use.

He eventually pleaded guilty to the one-count charge of criminal impersonation preferred against him on Thursday. He was accordingly convicted and sentenced by the presiding judge.

The court also ordered the convict to make restitution of the sum of N889,995, which he got through his fraudulent act.

He is similarly to forfeit one Iphone 7, and one Huawei handset to the Federal Government of Nigeria.