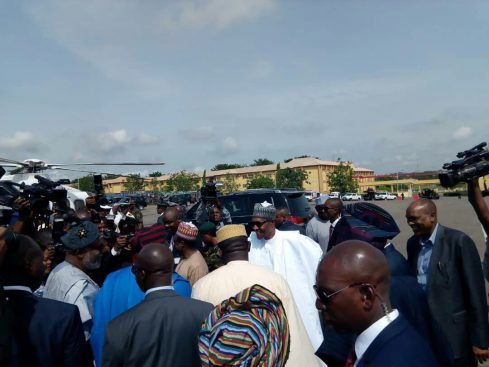 President Buhari lands in Ogun to commission the projects

President Muhammadu Buhari on Saturday in Abeokuta inaugurated some projects executed by the outgoing governor of Ogun, Sen. Ibikunle Amosun.

The projects are the Ogun Judicial Complex, along Kobape Road, the 10,000 – seater capacity Amphil-Theatre at Oke-Ilewo, the Campala/Adire mall at Itoku and the Ogun Television Digital Studio along Ajebo Road.

The president also inspected the 250-bed ultra-modern hospital at Oke-Mosan.

At the commissioning of the Judicial Complex, Buhari described the projects as first class and in tune with international standard.

He said that the projects and the way Amosun had christened them were suggestive of the fact that the governor had prepared ahead of the day he would leave office.

“Judging from the projects that I have seen and the name that the governor has given them (legacy projects), I think he has prepared himself ahead to leave office.

“I congratulate him for having the foresight and saving resources to put the infrastructure in place to ensure his footprints remain permanent,” he said.

Buhari noted that God had elevated Amosun with his victory at the Feb. 23, Senatorial polls in the state during which he won the Ogun Central Senatorial seat.

He expressed hope that Amosun would use the platform to further serve the people of Ogun in particular and Nigerians in general.

In his opening remarks, Amosun commended Buhari for coming to the state for the event in spite of his tight schedules particularly in the Ramadan period.

Amosun who recalled that Buhari laid the foundation of the Judicial Complex in February 2016, explained that the projects were made possible because of the enormous support Ogun enjoyed from the Muhammadu Buhari-led administration.