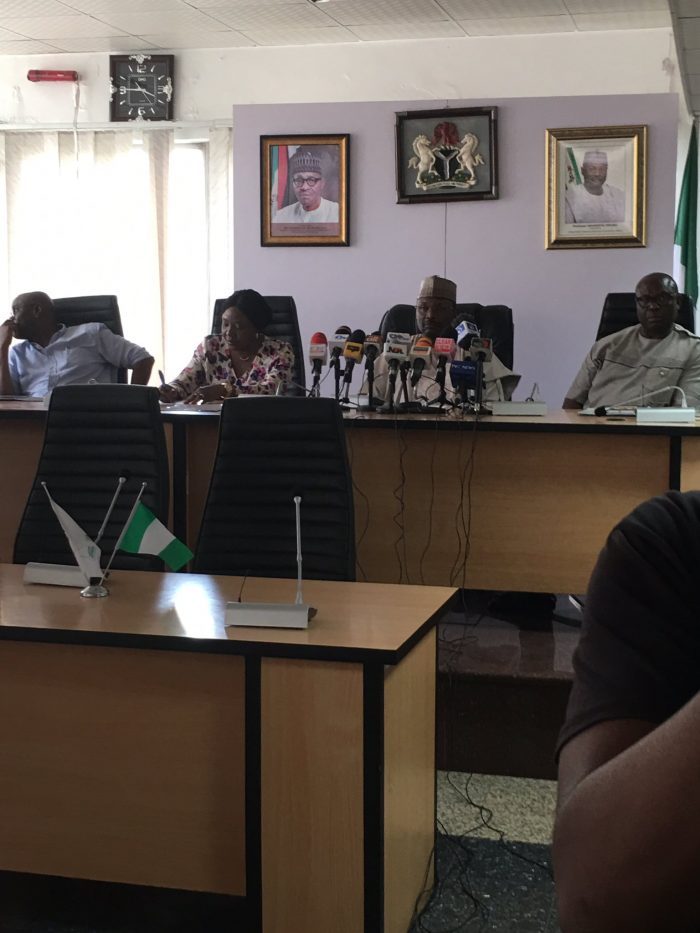 First, let me welcome all of you to this Press Conference. The reason for addressing you today is to provide an update on the recent decision of the Supreme Court regarding the candidates fielded by the APC in Zamfara State for the 2019 elections

2. It is important to provide a background to the legal process that culminated in the Supreme Court decision on 24/5/19. You may all recall that the Commission issued the Timetable and Schedule of Activities for the 2019 general elections on 9/1/18, over one year in advance.

2. Among other activities, the conduct of party primaries was scheduled to take place between 18th August and 7th October 2018.

3. Unfortunately, the APC did not conduct its primaries in Zamfara State within this stipulated time and the Commission duly informed the party that it would not be in a position to present candidates for elections in the State.

4. Subsequently, various interested parties, including the APC itself, approached the court over the decision of the Commission.

5. Just before the election, the subsisting court judgment at the time ordered the Commission to include the APC on the ballot for the Governorship, National Assembly and State Assembly elections, which the Commission complied with.

6. However, since the elections were completed, a Court of Appeal judgment and now a Supreme Court judgment have determined that the APC did not conduct valid primaries for the elections in question.

7. In its judgment delivered on 24/5/19, the Supreme Court, having determined that the APC did not conduct valid primaries, said that the votes cast for the party in all the elections in question were “wasted” and ordered the Commission to recognize the runners-up as the winners.

10. While the legislative elections (Senatorial, House of Representatives & State House of Assembly elections) are straight forward to deal with because they entail first-past-the-post or simple majority of votes, the Governorship election is determined not just by majority votes

11. … but also spread in accordance with Section 179 (2) of the 1999 Constitution (as amended). This means that we had to first discount the votes cast for the APC at the elections and then carefully rework the spread by Local Government Areas based on the new valid votes.

12. In compliance with the Supreme Court judgment, the Commission has now determined the winners of the elections in Zamfara State as follows:

INEC will issue Certificates of Return to the new winners as follows:
i. Governor & Deputy Governor-elect, Senators-elect & Members of the House of Representatives-elect will receive their certificates on Monday 27th May 2019 @ the Commission’s Electoral Institute at 2.00pm.

ii. Members of the State House of Assembly-elect will receive their certificates from the Resident Electoral Commissioner (REC) for Zamfara State at the INEC State Office in Gusau on Friday 31stMay 2019 at 10.00am.

I wish to seize this opportunity to draw the attention of all stakeholders, but particularly the political parties, to the implications of the Supreme Court judgment on the Zamfara matter.

It is clear that properly conducted party primaries are cardinal to the proper internal functioning of political parties, the electoral process and our democratic system at large.

Therefore, political parties must take very seriously the conduct of primaries according to all extant rules, including the monitoring of the processes by INEC to avoid a repeat of the Zamfara experience.

I want therefore to remind us that the Commission has since 9th April 2019 issued the Timetable and Schedule of Activities for the 2019 Bayelsa and Kogi Governorship elections by which party primaries are scheduled to hold between the 2nd and 29th August 2019.

I appeal to political parties intending to field candidates in the elections to adhere strictly to this and other timelines in the Timetable and Schedule of activities.

I thank you very much and I will now take some questions.