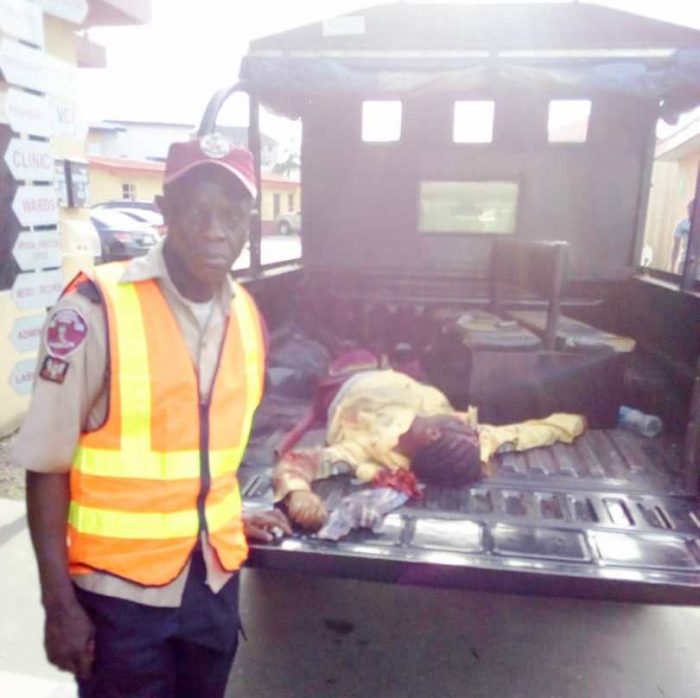 The remains of the deceased LASTMA officer

Tragedy struck in Apapa area of Lagos, Southwest Nigeria on Saturday as a female officer of the Lagos State Traffic Management Agency, LASTMA, was crushed to death by a trailer.

PM News gathered that the horror incident occurred on Saturday evening around 4:3pm.

The name of the deceased officer was giving as Arogundade Remilekun, whose station base was Apapa Zone 36.

It was gathered that the officer was at the back of the truck when the tragedy occurred.

The trailer was said to have reversed without her knowing and crushed her to death immediately.

Spokesperson, LASTMA, Mamud Hassan when contacted confirmed the tragedy, saying that the officer was controlling traffic when the trailer reversed and crushed her to death.

He said the driver of the trailer fled the scene and abandoned the vehicle which had been impounded by the police.

Hassan disclosed that the deceased was survived by her two-year old daughter, a husband who worked in one of the Local Governments in Lagos and a grandmother.

He added that the remains of the victim had been deposited at the Lagos Island General Hospital morgue.

Hassan quoted the LASTMA General Manager, Olawale Musa as saying that the authority would not be deterred in carrying out its assigned duties in Lagos.

While commiserating with the deceased, Musa appealed to tankers to re-certify their vehicles before putting them on the road to avert tragedies.

Her remains had been evacuated from the scene of the tragedy. Her demise has brought mourning to the LASTMA family.

LASTMA officers have been object of attacks and killings in recent times.

In 2016, the Zonal Head of LASTMA, Apapa, identified Bakare was beaten to death by suspected okada riders and touts in Apapa area of Lagos.

Bakare was killed at Point Road, Apapa while enforcing the road traffic law which banned okada riders from plying 475 major roads in Lagos. Bakare was said to have been attacked and was brutally murdered by the irate okada

In 2018, n operative of the Federal Special Anti-Robbery Squad (FSARS) shot dead a LASTMA officer at Iyana Ipaja area of Lagos during an altercation.

The FSARS officer, identified as Inspector Olakunle Olonade, was involved in a fight with the LASTMA official, identified as Rotimi Adeyemo, when the latter stopped him for violating a traffic law at the Iyana Ipaja area of Lagos State on Wednesday, November 28, 2018.

The plain-clothed officer reportedly fetched a gun in his vehicle and gunned down Adeyemo after they disagreed on why he was stopped by his 46-year-old victim.