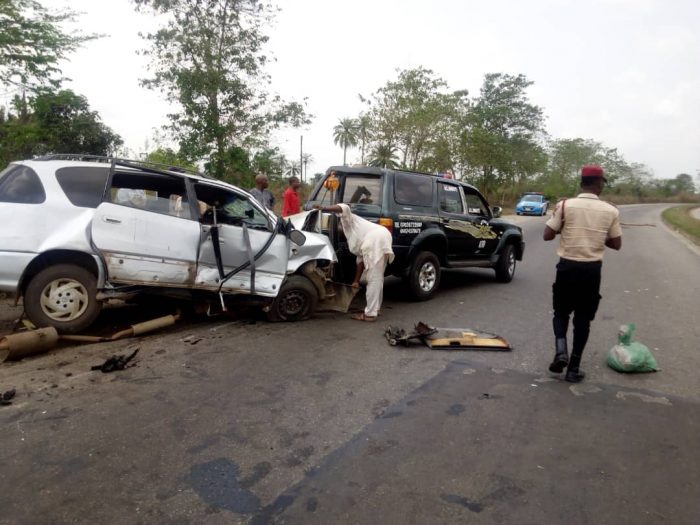 Four persons have been confirmed dead in an accident, involving a Toyota Corolla car and a low bed Mack trailer at the Obada Oko area on the Lagos-Abeokuta Expressway.

Mr Babatunde Akinbiyi, the spokesman of the Traffic Compliance and Enforcement Corps (TRACE), confirmed the incident to News Agency of Nigeria (NAN) in Abeokuta on Monday.

Akinbiyi said that the accident occurred around 7:36pm on Sunday and attributed it to recklessness and speed on the part of both drivers.

Akinbiyi said that eight persons, including seven adults and one female child, were involved in the crash.

He said that four occupants of the car died on the spot, while two others sustained injuries.

According to him, the trailer driver and the motor boy ran away before the rescue team arrived at the scene.

He said: “I learnt the low bed trailer with no registration number was trying to make a U-turn at Obada Oko allegedly without trafficating, when the Toyota Corolla, marked EM 866 APP, which was on speed from Lagos, rammed into it.

“However, six passengers were in the Toyota Corolla when the accident happened.

“Four persons, including the driver and child, died on the spot, while the remaining two were injured.”

He further said that the injured were taken to the General Hospital, Ijaye, Abeokuta, along with the remains of the dead.

He also said that the accident vehicles had been towed to the Divisional Police Office, Adigbe in Abeokuta.