How I was chased with cutlasses, dangerous weapons - Senator Sunmonu 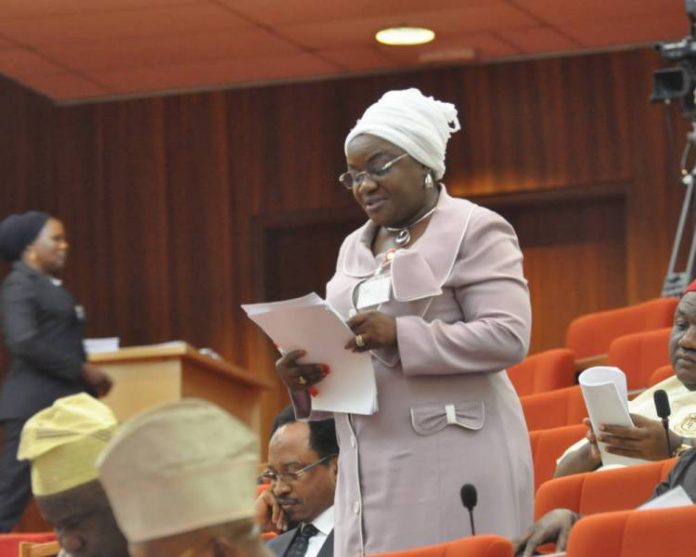 Senator Mosurat Sunmonu, representing Oyo Central Senatorial District on Monday narrated how hundreds of residents of Ibadan communities chased her and members of her entourage with cutlasses and other dangerous weapons over an alleged government neglect and unfulfilled electoral promises.

The lawmaker, who presided over Oyo state House of Assembly for four years as the first female Speaker in the state, said she escaped death by the whiskers as the irate community residents vented their anger during a campaign tour to Oke Ayotuntun Oki, Egbeda Local Government, Ibadan, Oyo state .

Senator Sunmonu made the disclosure at the commissioning and handing over of the Ibadan Erosion Control Project to the Oke Ayotuntun Oki community Monday.

The project which includes drainages, bridges, and 3.3kilometre asphalt road, was facilitated by Senator Monsurat Sunmonu, and funded through the Ecological Fund Office in the office of the Secretary to the Government of the Federation ( OSGF), of the presidency .

The elated lawmaker, who was given a rousing welcome by a jubilant mammoth crowd, tasked the people to always hold their elected representatives accountable by reminding them of the promises made during electioneering campaign.

She noted that her four year tenure as Senator representing the people of Oyo Central in the National Assembly was an opportunity to facilitate the construction and rehabilitation of Oyo/Ogbomoso road, completion of Oke Ayotuntun erosion control project and many more for the development of the senatorial district.

In his speech, President Mohammadu Buhari who was represented by the Minister of Health, Professor Isaac Adewole, said that there is no doubt that the project would bring relief to the residents of the communities, adding that the project was among the nineteen federal government’s ecological intervention projects approved by the federal executive council for the first quarter of 2018.

”The contract is expected to check flooding and erosion within the Oke Ayotuntun community and its environs . The age long problem of gully erosion and flooding in the country cannot be overemphasised .

”The approval of this project is a testimony to the present administration’s promise that no part of the country will suffer any neglect owing to its geographical location or political consideration”, the President said.

Earlier , in his welcome address, the Permanent Secretary Ecological Fund Office, the Presidency, Dr. Habiba Lawal explained that project was initiated through a request for an urgent intervention forwarded to the Ecological Fund Office by Senator Monsurat Sunmonu in order to arrest the continuous erosion and flood menace being encountered by the host communities.

While commending the contractor and the consultant for the timely completion of the project, Dr. Lawal stated that the project is expected to achieve the dual purpose of enabling the host community to take over and exercise ownership over the project , to ensure its maintenance and sustainability .

Present at the occasion are community leaders, federal government, state and local delegation, members of the organised public sector and women groups amongst others.